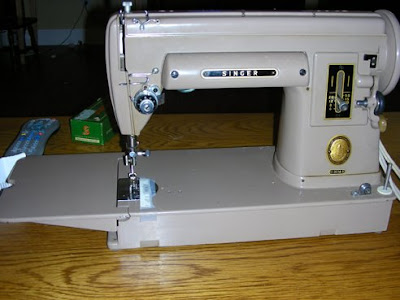 Let me introduce you to my Vintage Singer 301a – a badass, all-metal, gear-driven, slant-shank, straight-stitch machine with a longbed and carrying case.

I was on the hunt for a good sewing machine for many months when my friend, Pam, steered me towards this vintage machine. She said that Singer machines made in this era (1950’s-mid 60’s) were very reliable and were built to run forever (or something to that extent). I did some research and found rave reviews of the 301a and even got to try Pam’s. I loved how quietly and effortlessly it ran (I quilted my sampler quilt with her 301a) so I went on a mission to find one.

I did a search on Craigslist and one lady said she had one. By the time I got there to take a look at it she already sold it. So I turned to Ebay. It was the first time I’ve ever bid on a popular item. Boy was it competitive!! I lost about 3 auctions until I finally won this for $108 (including shipping). What a great deal! I eventually bought a zigzagger (which is interesting to use – it moves the fabric, not the needle) and a set of attachments/presser feet.

My 301a arrived the Wednesday after I made my shirred dress. It came with the same blue thread and a fabric/stitching sample that they showed on the Ebay listing. I tried it out and absolutely loved it. So I let the machine and case “air out” its antique smell for the day.

Here’s where the cat-killing comes in. Thursday morning, I woke up to Hugs puking on our bed. I immediately thought of the machine and ran downstairs. The spool of blue thread was still there but the machine wasn’t threaded. I couldn’t recall if I had wound it or kept it threaded. So we took a wait-and-see approach to our cat’s puking. We hoped she would cough it up like she did the brown thread.

A week goes by and Hugs is not getting any better. So I took her to the vet and they found the blue thread wrapped around her tongue. They gave us the option of either $1500 for the surgery or euthanasia for $100. Long story short, we talked them into another alternative where they would try to pull the string out while the cat was tranquilized. They did the procedure and called me 15 minutes later to tell me that they noticed that her belly moved and that the thread was wrapped around her intestines too. So that meant I had to opt for euthanasia. Sobbing, I went back to the vet and waited to say goodbye to our dear cat. I got called into the exam room when the surgeon came out and said, “Well, we got it out!” Boy were we lucky. The string was 2 feet long with about a 1 inch knot at the end of it (where it was getting into her intestine).

The vet was amazed that she lasted more than a week like this. He said that in most cases that he’s seen, the thread caused the cat’s intestines to tangle up within 1-2 days. Hugs was definitely very lucky. She’s probably used up 8 of her 9 lives with this ordeal.

Now I keep a good eye on my thread and machine. I can now use my 301a without the guilt that it killed my cat. (cue the “Debbie Downer” theme song).