6:30 am we were up and at ’em. We were getting used to the cold mornings and quickly got dressed then broke down the rest of our campsite and headed out of Yellowstone. We had a long day of driving across Wyoming to Devil’s Tower. On our way out of the park, we were still a little disappointed that we didn’t see a bear. Thom jokingly asked me if there was a saint for spotting bears. I thought about it and St. Francis of Assisi came to mind, since he was fond of animals. I said a quick prayer for assistance as we turned the bend, there was a small crowd of vehicles gathered by a field. Sure enough, there was a bear—not just any bear, but a GRIZZLY BEAR! There are under 150 grizzly bears in the park so spotting one is pretty special. Most of the time people spot black bears. God pays attention to our smallest desires!

Once the bear crossed the “200-yard viewing threshold” we were out of there!

Leaving Yellowstone felt like leaving a good friend’s house —You’re thankful for the visit and wish you could stay longer, but you have to go. Until we meet again, Yellowstone…

The geography of western Wyoming is pretty impressive. I’ve never seen anything like it before. The cliffs and mountains looked otherworldly! We stopped for gas and to restock food in Cody, WY and after that, the road east was fairly flat until we reached the Bighorn Mountain Range. On the road through the mountain range, signs were posted that showed the geologic age and type of rocks and formations surrounding us. We stopped at Shell Falls for a quick snack break and took in the scenery.

On our way to Devil’s Tower, we kept missing big downpours and thunderstorms but were able to enjoy its after effects – a triple rainbow!

Once we got to our turnoff to head north to Devil’s Tower, we spotted a “Wall Drug” sign. Thom said we should start counting how many of their billboards we pass (he says it’s a lot). It was 15 minutes until closing when we arrived at Devil’s Tower. We decided to pick up the Junior Ranger booklet since we planned on visiting very early in the morning and just wanted to head up for a hike without going through the whole junior ranger program overview. On our way out we saw a ranger looking up at the big mountain with a telescope. She let us take a peek to see peregrine falcon chicks that were getting ready to fly. (We looked but couldn’t tell what she was looking at.) We were also next to the prairie dog town and got to listen to the little critters bark at each other. 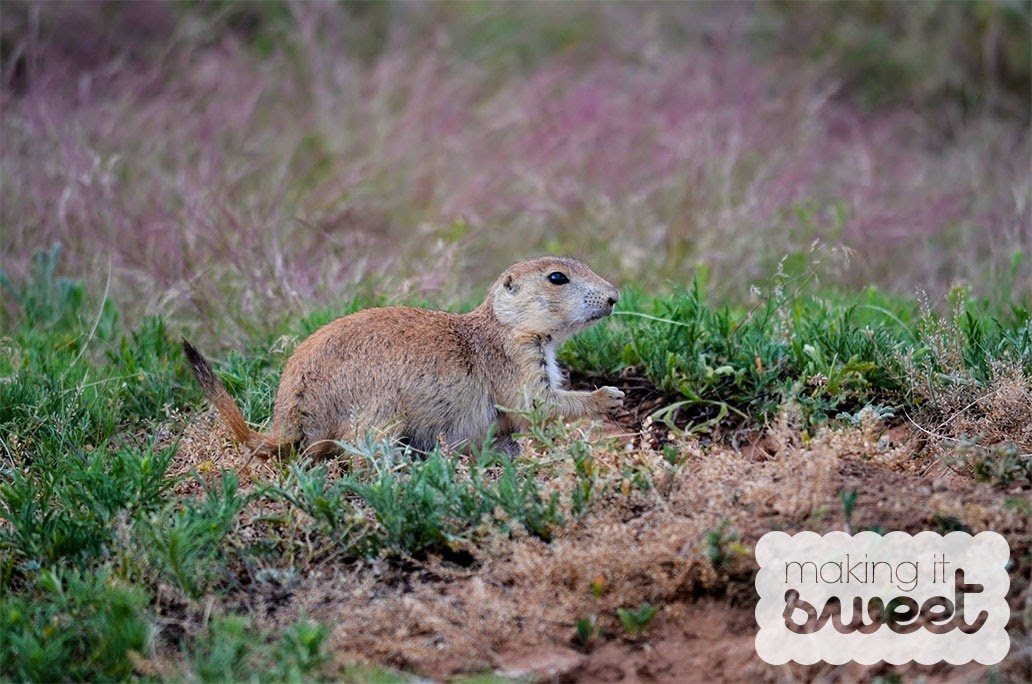 Our KOA campground was right at the entrance of Devils Tower. The campground had a lot of RVs and the tent sites were on a “claim-your-space” open field (in other words, no space assignment). At 7pm they start a community campfire and nightly at 8pm, they show “Close Encounters of the Third Kind” in their outdoor movie area. It was surreal watching a movie featuring Devils Tower with the actual tower as our backdrop.

We set up our site next to some RVs, which may have been a bad idea because of the generators running. But we liked the space since it was so close to the sinks and bathrooms. Our site had a perfect view of Devils Tower and it got so dark at night that you can see so many stars!

In the morning we got up, had our first hot breakfast in a three days and took showers.  Showers proved to be a hazard with two in our party sustaining injuries. The baby got quite the goose egg on her forehead when she wiggled out of her sister’s arms and onto the tile floor while waiting to shower. Then Thom threw out his back while reaching for shampoo in the shower. It wasn’t a good start—especially since we were going to be hiking and visiting a total of 3 national sites!

We headed back up the hill to Devils Tower and took a hike 1.5 miles around the base. Devils Tower is the first national monument in the National Park system. It is a created from a “lava plug” of an ancient volcano. Once the lava cooled, vertical cracks formed which created the hexagonal shapes in the mountain. The volcano eventually eroded and exposed the plug. It’s amazing to think about the process it took to form that!

We were in awe to see people climbing up the mountain. We were told that a group started at 4:30am that morning. As we walked around, we met two young ladies who were also visiting national parks on their road trip. They were pretty impressed that we were traveling and camping with kids and one said to the other, “See, your travel dreams don’t have to end when you have kids!” It is all too true — let your kids enjoy these moments with you! 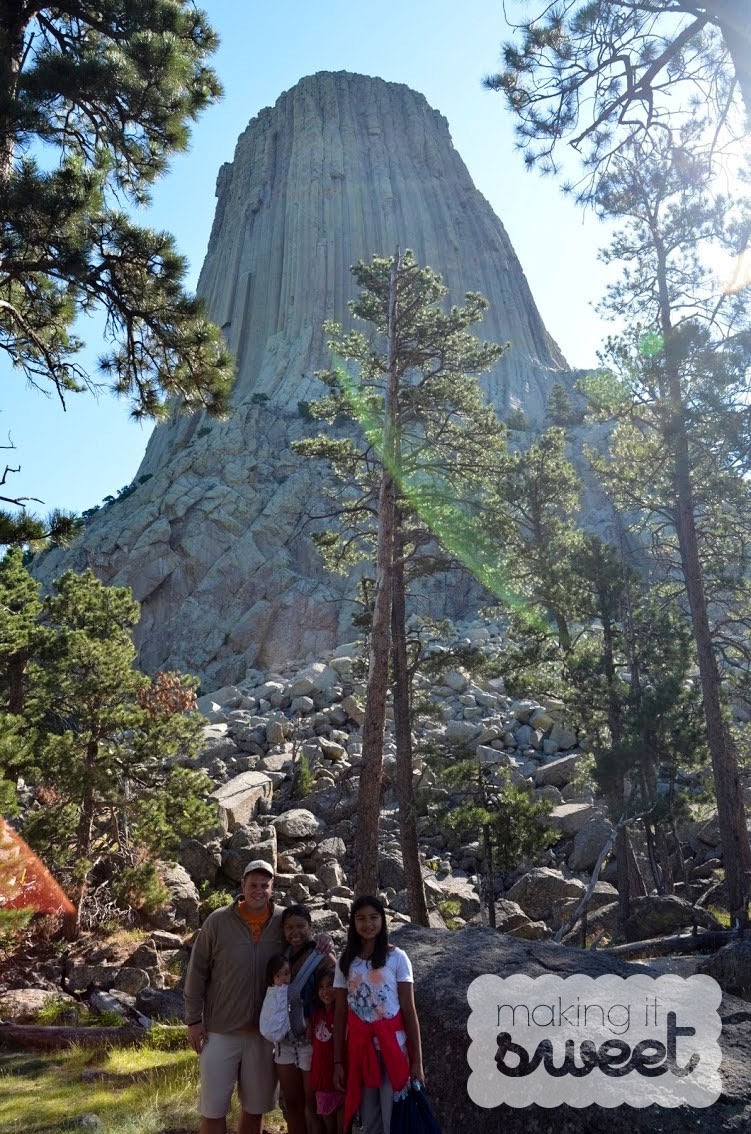 We didn’t linger too long since we had to head to our next destination – Mt. Rushmore. Once in South Dakota, we drove through Sturgis, where they were getting ready for a big bike rally. 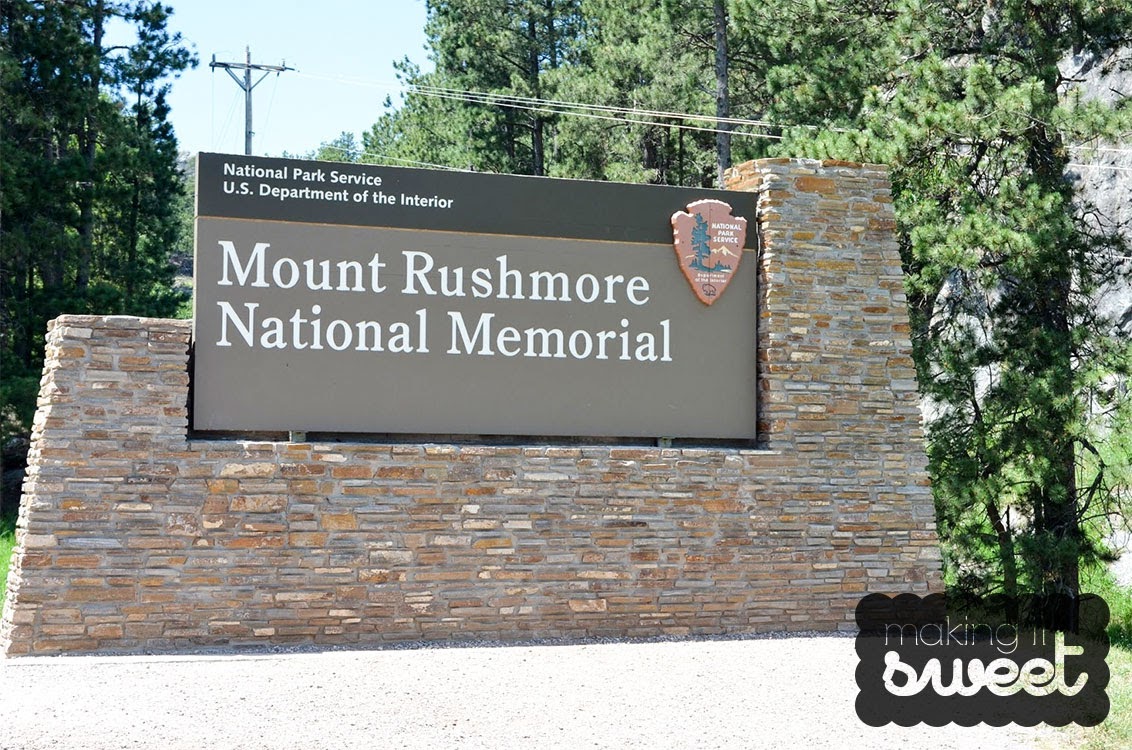 Mount Rushmore is located in Keystone, SD. Keystone is quite the tourist trap with all kinds of gimmicks to get you to view their various attractions (we didn’t fall for any of it). Once we arrived at Mt. Rushmore, we found out that our National Parks pass was pretty useless for this location. We had to pay an $11 “parking fee” which, they say, is valid all year long. Who goes there more than once, other than residents?

It was pretty warm out and we went into the visitors center to cool down. There were a lot of great exhibits on how the monument was built. Then of course, there was the monument itself. The viewing platform is a lot further and lower from the monument than I thought it would be. From below, the monument is dwarfed by the surrounding hillside but it is quite impressive when you get up a little higher. 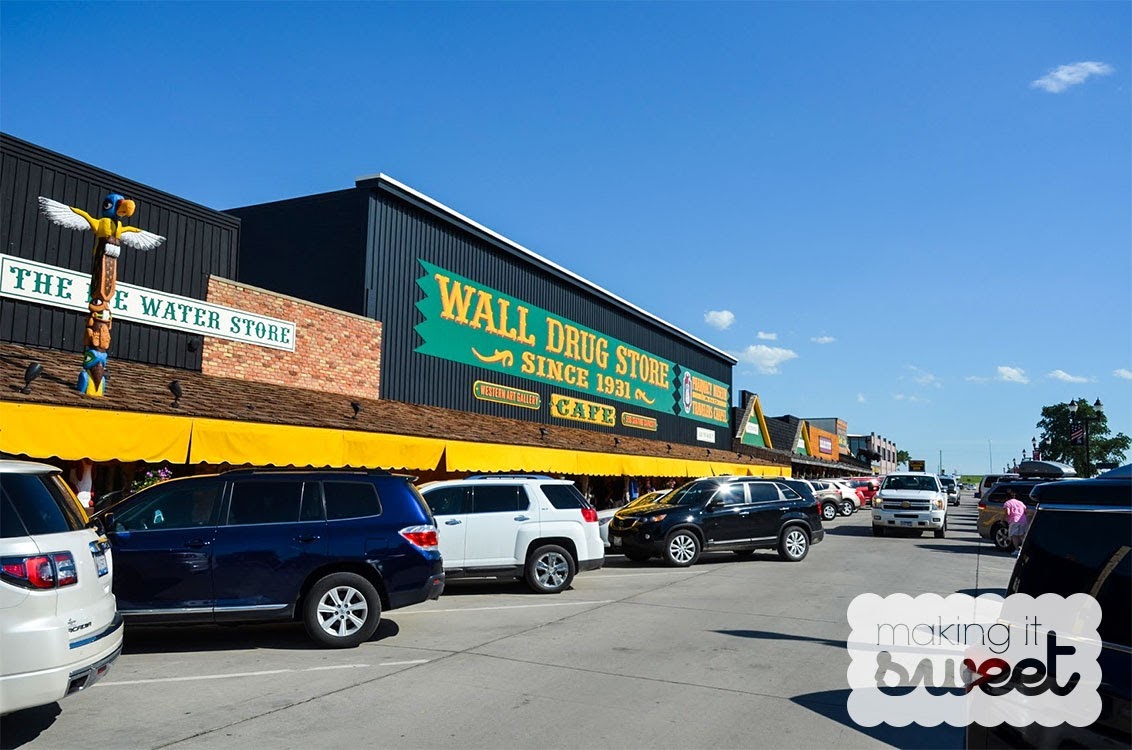 On our way to The Badlands we had to stop at Wall Drug. After all, 61 billboards told us to. Wall Drug is a huge shopping center that spawned off from the Wall Drug Store. They are known for their 5-cent coffee and free ice water. The place was massive and it was store after store after store — all connected by corridors and doorways. You would walk into a toy store, go through a door and find yourself in a convenience store. They even had a chapel inside! 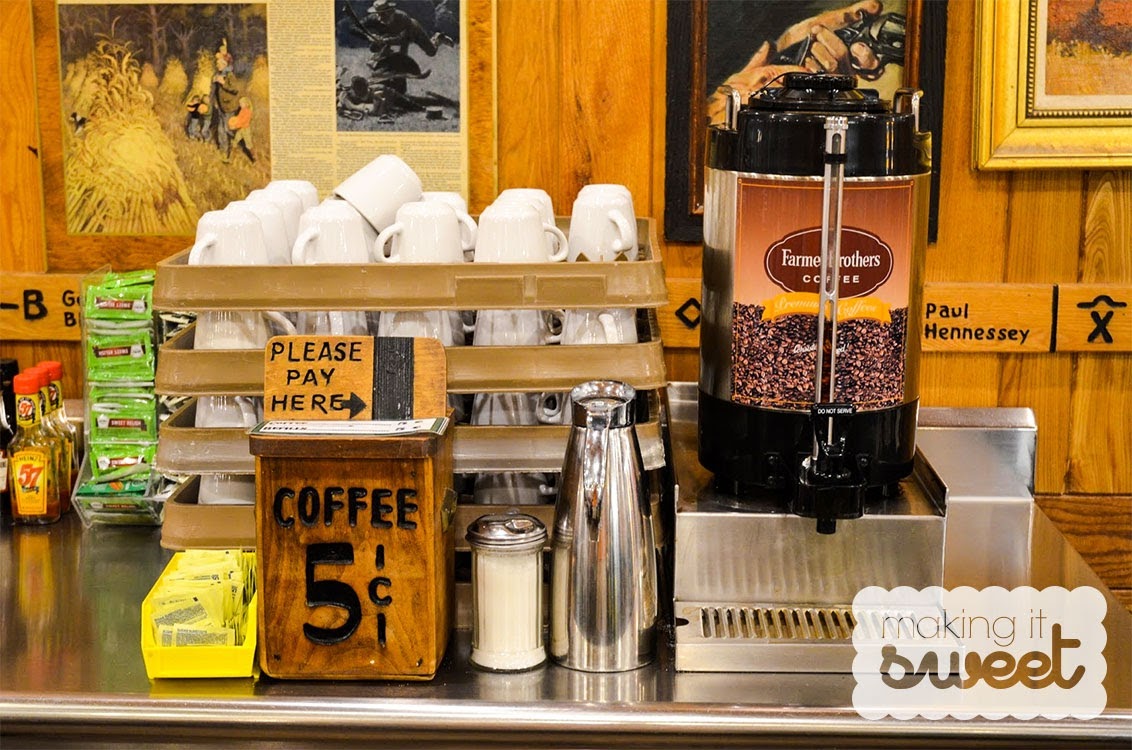 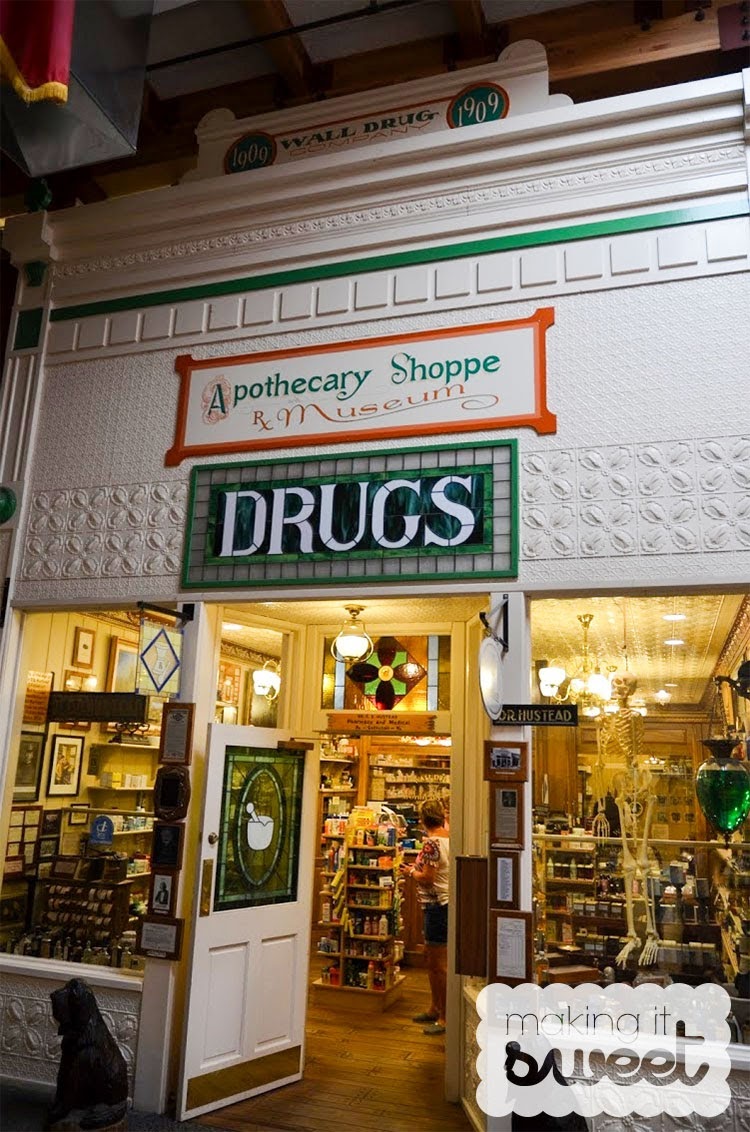 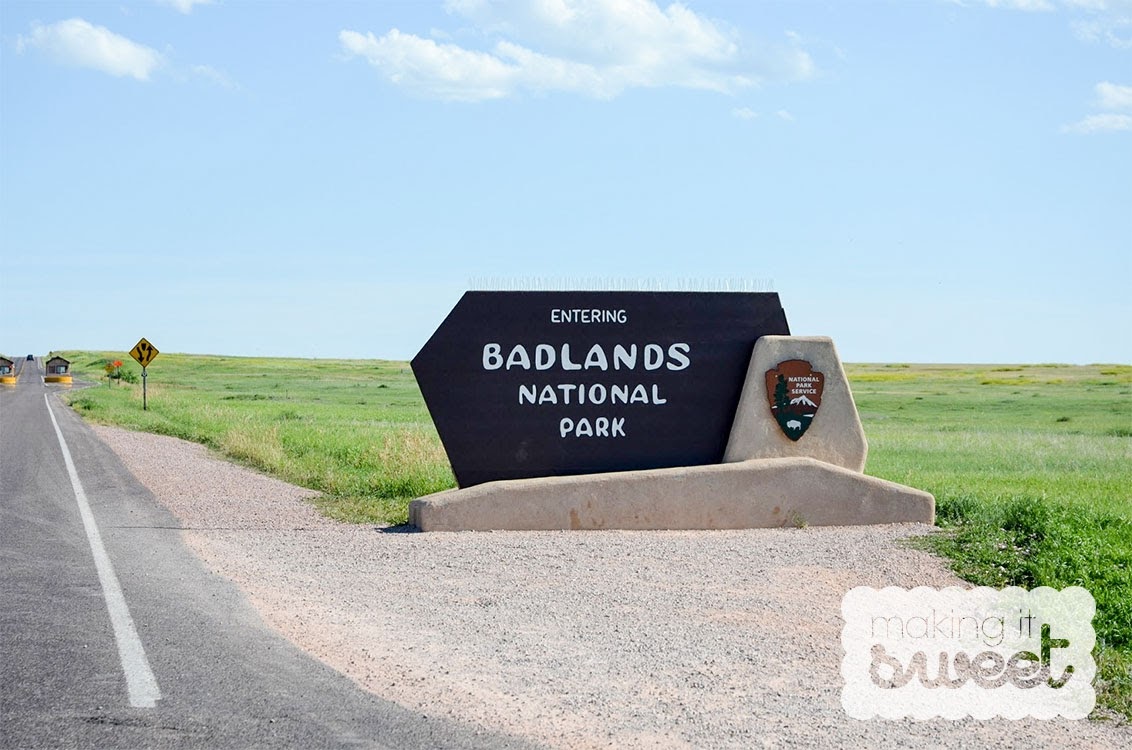 The Badlands was only a quick 15 minute drive from Wall. The badlands were formed by volcanic ash that turned into rock and were exposed as the earth eroded around it. The Badlands is beautiful and quite mysterious. You don’t know whether the formations want to go up or down as mountains rise out of the plains and canyons seem to appear out of nowhere.

On our drive we saw a small, dirt road and decided to take it. It’s never fun hearing a bunch of little rocks hitting the underside of your vehicle. We ended up outside the park and decided to turn around to get back on the main road before we got lost.

There aren’t many hiking trails in the Badlands. I think the landscape and extreme weather doesn’t lend itself to hiking. We drove from vista to vista and snapped some photos while taking in the sights. We found a “fossil trail” towards the end and the kids enjoyed a little freedom in the formations.

By the time we got to the visitors center it was closed. The kids were a little disappointed that they didn’t get their Junior Ranger badges.

We stayed the night at KOA Badlands in Interior, SD — 5 miles from the park entrance. When booking this site, I had one of the best customer experiences when I had to alter my reservation. The lady on the other side of the phone was so polite. I shared my experience once I checked in and they were appreciative of the compliment.

Our campsite was in their “Wagon Wheel” circle. I’ve never seen a KOA tent site such as this — it had a little shelter with its own sink, electricity on the wall, a concrete pad for the picnic table, and a sand pad for the tent. It was quite nice!

Since we arrived late, we took a moment to enjoy the campground a little and let the kids play miniature golf — you can’t beat the price to play for $2/kid!

The downside of playing first meant dinner was second. I prepared dinner by lantern and you know what likes lanterns? Bugs. BIG SOUTH DAKOTA BUGS — beetles to be exact. We didn’t think of setting up the screened tent  because we were under a shelter but I sure was regretting the fact that we weren’t protected by it. I tried to eat dinner quickly so I could get away from the light (and bugs). Thom killed about seven huge beetles plus there were many more little mosquitos — one which released some DNA evidence when it was killed.

I couldn’t have been more happier to be under a tent that night. It was warm and we opened the vents which gave us a great view of the night sky. It was so dark out that you can see stars with great clarity. Tomorrow is our turnaround point and the van will be pointing southwest, towards home. But it will take a few days to get there.