Oh, adobo—the staple in many Filipino households. Some would argue it’s the national dish of the Philippines. I love all it’s salty/sweet/sour goodness — what a “homey” dish, especially paired with steaming white rice covered with the “sabao” (sauce) that results from the cooking. If you go Filipino-house hopping and try their chicken adobo, I can guarantee you that no two are alike. Some like their adobo on the sour side, others like a soy sauce-forward flavor. Some, like my family, like a touch of sugar to cut into the tartness of the vinegar. Plus, my dad adds whole cloves to his dish which gives it almost a Chinese five-spice essence.

The problem with chicken adobo is that it’s very high in fat and sodium, much like other Filipino foods. Most members of my family suffer from high blood pressure, diabetes, and heart problems. It’s all due to the traditional Filipino diet. We love our food and we love it flavorful — even if it means the addition of MSG, sugar, fat and lots of salt.

My mom had a health scare last week.  My dad, sister and I spent three hours in an ER waiting room with mom. My mother’s spirit was pretty low at that moment. This was her second visit to the ER in 6 months, for possibly the same reason — ulcers. The last time she visited she needed a blood transfusion. Thankfully, through many prayers and diligence on her part to get to the hospital early, she didn’t need a blood transfusion.

Mom has diabetes, along with a list of other ailments. She doesn’t take her prescribed medication because she thought that she could manage it through diet and some of her own herbal concoctions. Truth is, she hasn’t changed her diet much. She eats healthier than how she used to eat but it all boils down to the Filipino food that my dad typically cooks or that she enjoys from the restaurant (or outings with friends). The doctor made it clear that she needed to take her medication because what she was doing wasn’t working and it’s causing complications with her organs.

This was a point of inspiration and a wake-up call for me. Maybe mom can have the food she enjoys, but a healthier version of it. So I started with one of my favorite dishes — chicken adobo. I swapped out the traditional ingredients of soy sauce and white vinegar for coconut aminos and organic, unrefined apple cider vinegar (with The Mother).

Coconut aminos is a great lower-sodium and gluten-free substitute for soy sauce. It has the overall essence of soy sauce but it’s milder and a little more mellow in flavor. Yes, you can taste a hint of coconut but it’s not the main flavor. You can find coconut aminos online or at most health food stores. More stores are starting to carry this product as the popularity of paleo diets and the need of gluten-free options are growing.

The sodium comparison:
Coconut Secret shows that chicken skin has a higher amount of monounsaturated fat than saturated fat so it’s not all that bad for you. Also, in my opinion, eating animal fat is more satisfying than refined oils and I tend to eat less of it.

Not a fan of chicken? Substitute pork shoulder or pork belly. The cooking time may be a bit longer, but that could be a good thing to let the pork braise and simmer in the sauce to get all that excellent flavor.

Next are the spices. Typically, it’s just whole peppercorn and bay leaves. My dad adds whole cloves to boost the flavor. I only had ground cloves and it did the job. Also, as much as I admire the ease of throwing in whole peppercorns, I hated eating them. There’s nothing like enjoying a juicy piece of chicken then suddenly chomping into a whole, pungent peppercorn. Talk about NOSE BURN! It really takes away from the experience. So I used freshly ground pepper instead.

So far this dish is gluten-free on it’s own. Even white rice is gluten-free so you’re good-to-go. If you’re going paleo with this dish, you could eat it with some cauliflower or taro root that has been riced and steamed. Or just have it on it’s own!

So how does it taste? It’s not a dead-ringer but it’s pretty close. I think it all depends on the brand of coconut aminos that you use. It is definitely an acceptable and healthier option than the traditional chicken adobo. Now on to more Filipino food experiments!

Have you converted  a favorite traditional dish into a healthier version? How did it turn out? Comment below! 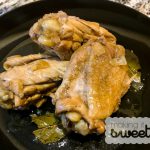 This can be made with pork shoulder or pork belly. Increase the simmer time to 35-40 minutes.

Disclosure: This post contains affiliate links in which I get some (like tiny) compensation for any click-throughs and purchases.