We were happy to have experienced a classic Route 66 motor-lodge at the Buckaroo. It was such a great value at $40! I hope the owners can fully restore it so that other tourists can see what they’re missing out on.

Our drive continued through the rain. We were en route to Edmond, OK which meant driving through the Texas panhandle. After crossing the Texas border, we stopped in Adrian, TX which is known to be the midpoint of Route 66. We peeked in the cafe and talked to some shop owners before heading off. 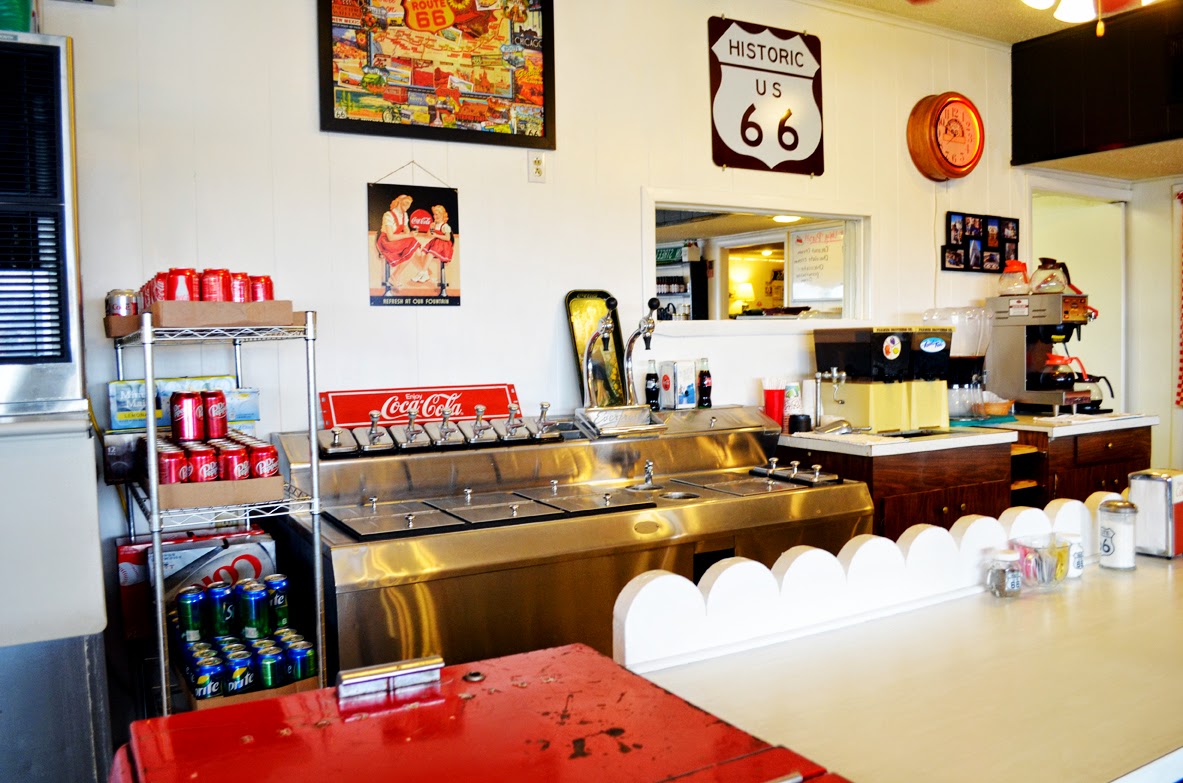 A must-see Route 66 attraction in Amarillo, TX is the famous, Cadillac Ranch. You’d miss it if you didn’t know where you where to look. The Route 66 Adventure Handbook had specific instructions of how to get there. 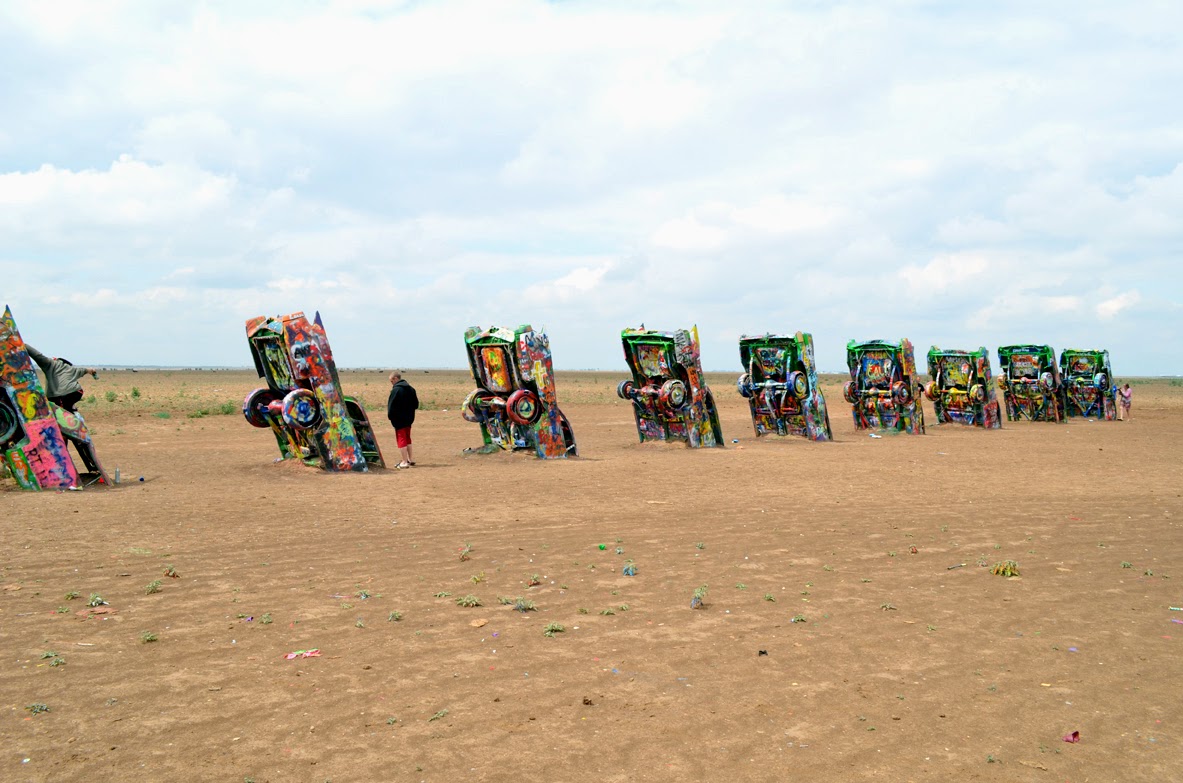 Another attraction in Amarillo was the Big Texan Steakhouse, famous for it’s 72-ounce steak eating challenge. Our intention was to have lunch at the pay-what-you-want Blessed Mary Cafe in Groom, TX, especially to taste their “Righteous Cheeseburgers” but they were closed. So it was PB&J sandwiches for us that day.

Continuing east we drove through McLean, TX to see the oldest Philips 66 gas station built in 1927. It was a cute, nicely restored building which is so basic compared to the modern gas stations we have today. 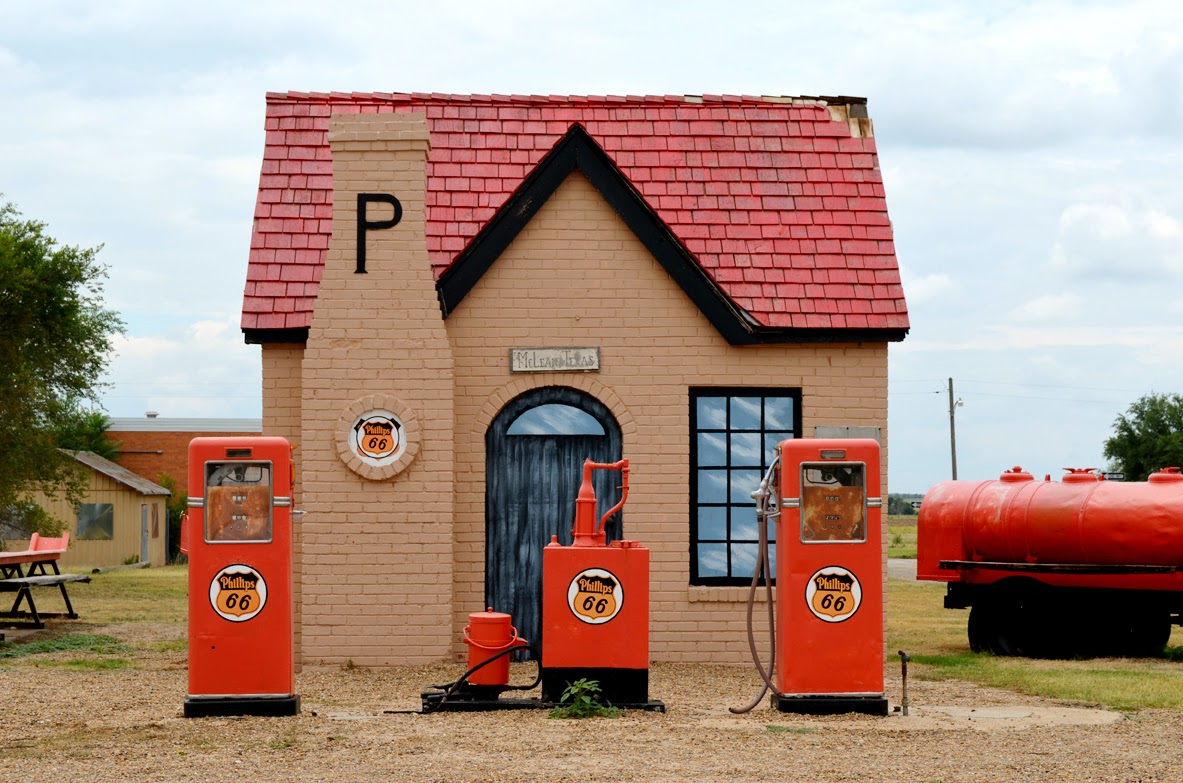 We stopped in Shamrock, TX and found cool, art-deco style buildings—including the U Drop Inn Conoco Gas Station that was depicted in the Disney “Cars” movie (as Luigi’s Tire Shop). 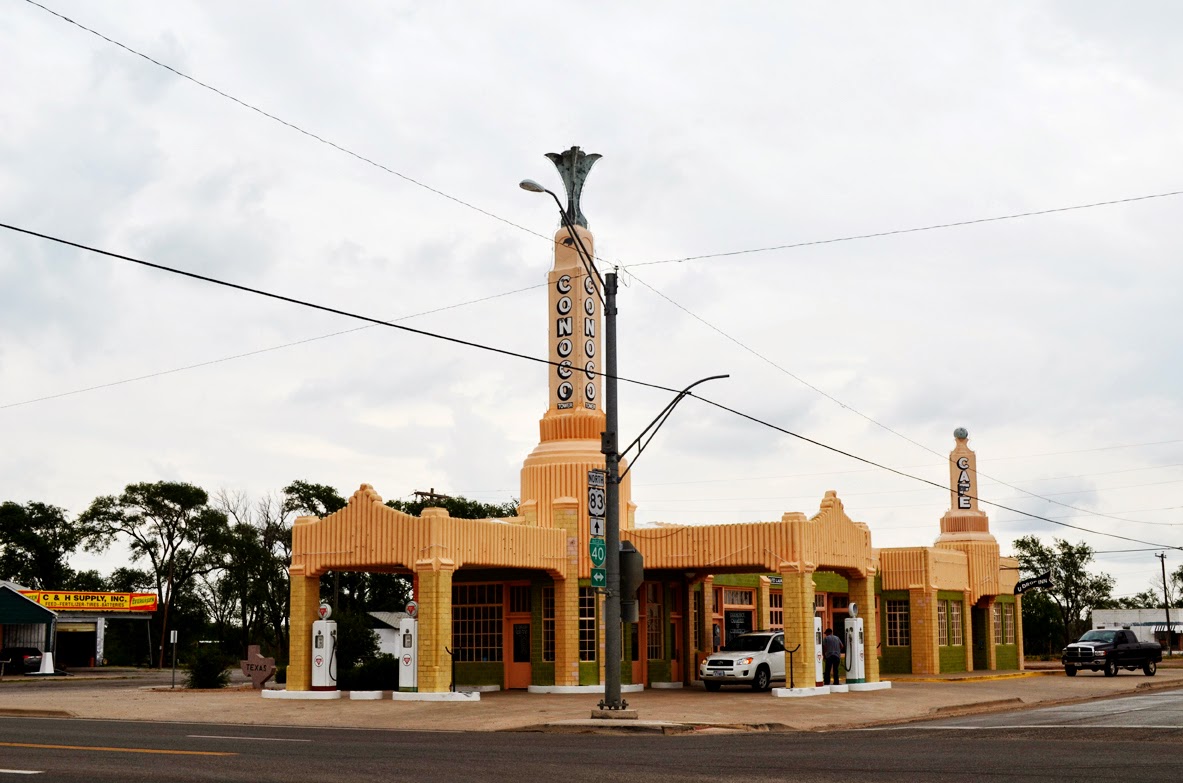 Crossing the state line was uneventful as we didn’t see any “Welcome to Oklahoma” signs. I can’t believe they didn’t have one on this major interstate! We reached Sayre, OK for gas and drove by the court house and “Owl Drug” which claims to be the oldest soda fountain on Route 66. We read (and saw) that the city had underground walkways marked by ramps to storm shelter-like doors in the sidewalk.

In Elk City, OK we passed by the National Route 66 Museum which you couldn’t miss because if it’s ginormous “Route 66” sign. There were also a few buildings restored within a one-block area. 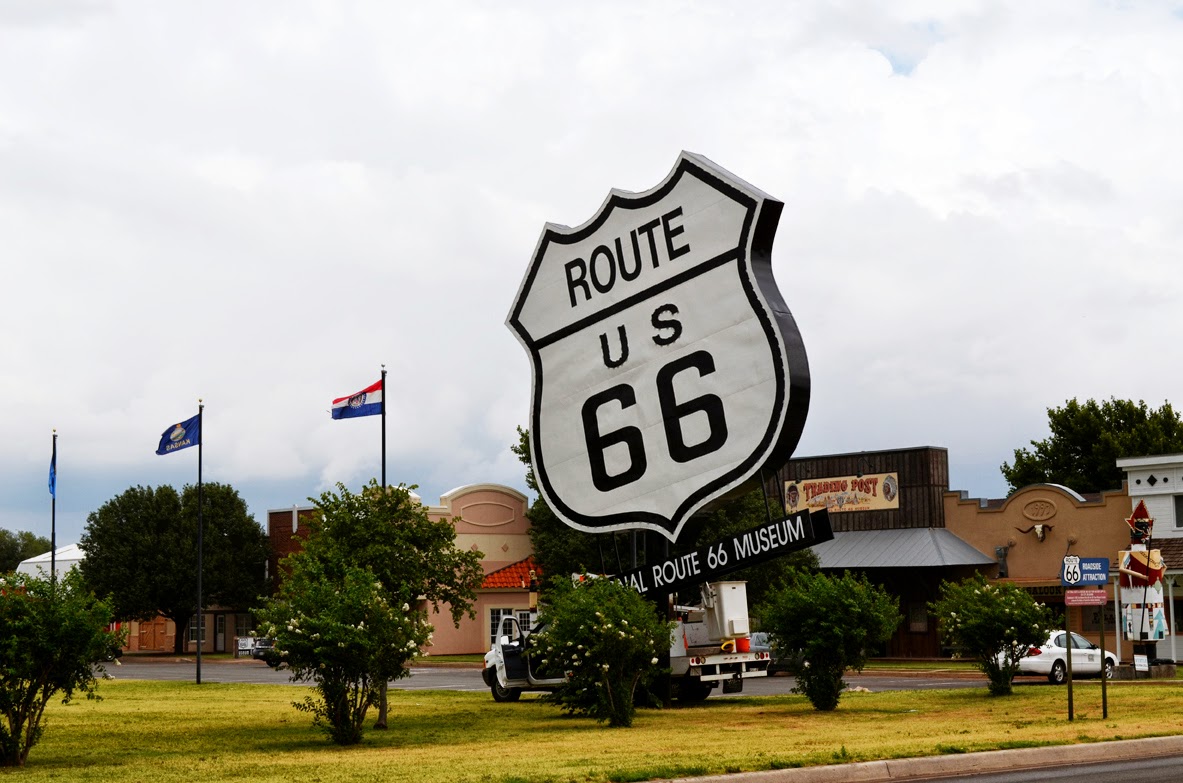 We finally made it close to our destination and took a side trip to Moore, OK to see the tornado damage from a few months prior. What we thought was a pile of rubble  in a parking lot was really the school that was struck hard by the tornado. It was amazing to think how neighborhoods could be devastated on one block, but the next street over remained intact. Never underestimate the power of nature! 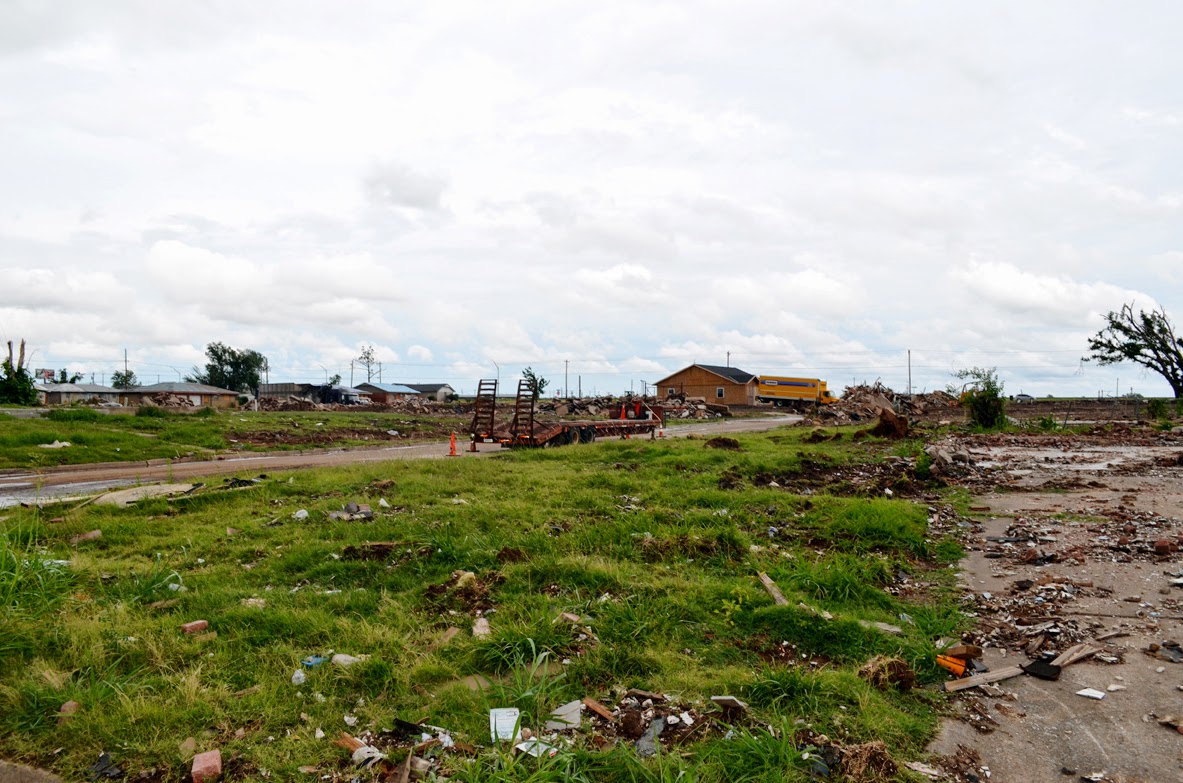 We headed north to Edmond, OK to stay at my cousins, Cindy and Ryan’s home. It was a nice reunion since I haven’t seen them since I was 10 years old! Her sisters also came over for dinner and it was nice to have our kids play together. We truly experienced “Southern hospitality” during our stay. They allowed us to stay in the guest house and fed us really well. It was one of the best stays so far!

As much as we loved having some creature comforts the road was calling our name. We were on a mission to get to our campsite in Missouri. We set out north on I-44 through Tulsa, OK. Along the way, we saw two turtles cross the road (they must have been the fastest turtles on earth)!

Once we crossed the Missouri State Line, the scenery immediately changed to lush forests. Driving through rural areas, we spotted Amish horse and buggies on the highway. We restocked supplies in Joplin, MO and encountered extremely heavy rain in I-60. This concerned us as our campground could be very muddy. But the weather cleared up in time for us to enjoy Missouri’s scenic byways. 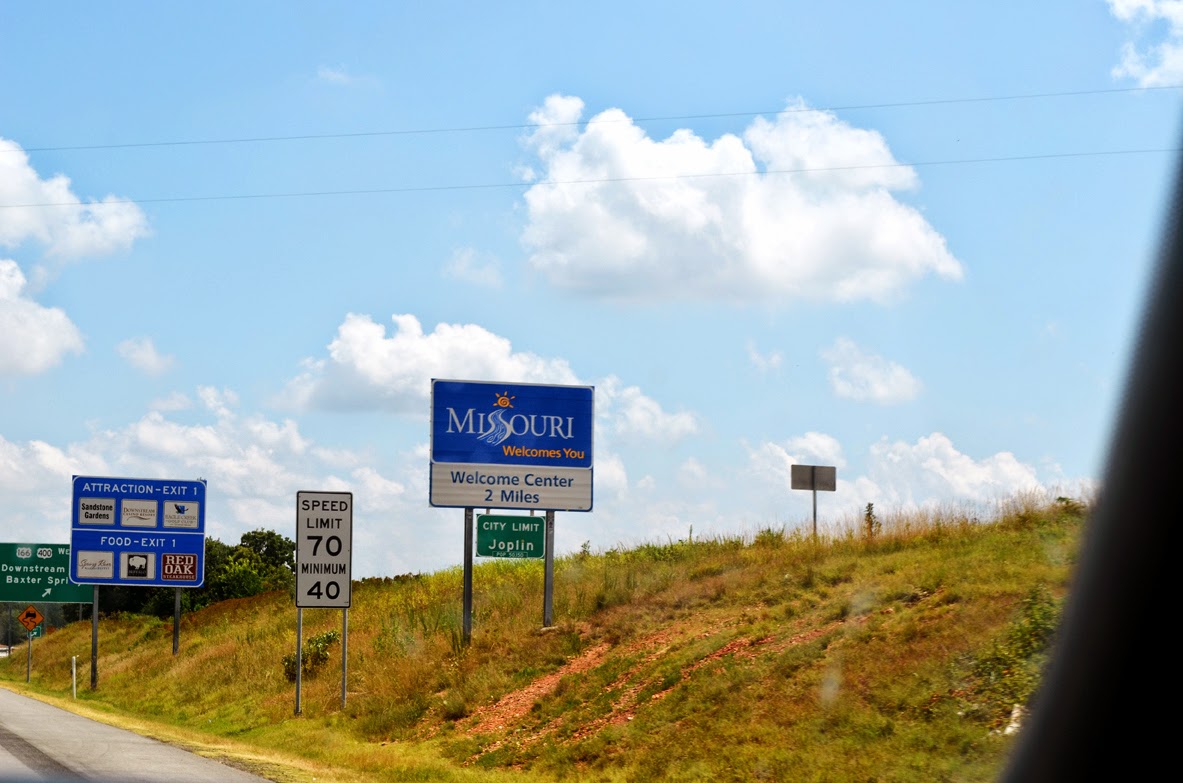 We finally arrived at Round Spring, MO and set up camp. My husband’s dad and step-mom had already set up their site. Thom’s brother, John, and friends, Rusty and Janie joined us not too long after our arrival.

It was nice to think that we would be staying for a couple days, and not having to immediately, “get-up-and-go” in the morning. Right before we all went to bed we spotted a skunk. It kept us on our toes (and nose) until we fell asleep. The next day is going to be a big day, and the whole reason for our road trip.

Next Up: The Ozark Scenic Riverways