There’s nothing like the call of the birds to act as your alarm clock. The sound was so distinct we had to record it! Today was my birthday and it was the day we had to pack up and leave. It was perfect timing since more people were filtering in to spend time on the river for the weekend. We quickly ate our breakfasts and broke down the site. We said our “good-byes” and “see you laters” since we would be visiting the in-laws again the next day at their home.

We headed toward St. Louis passing through Rolla, MO to check up my husband’s grandparents’ home. Rolla also happens to be along Route 66. We passed by the old house and were happy to see that it was being taken care of by the current tenants. An interesting fact about Rolla was that the city was named after Raleigh, NC. Because of the Southern Missouri accent, it was pronounced and subsequently spelled as, “Rolla” (pr. Raw-lah). If you’ve ever been to Missouri, you’d notice that there are two ways to pronounce the state name. Most of the western part would would say, “Missou-ree” where the eastern and some southern parts would say, “Missou-rah.” Both pronunciations are correct!

We made it to Manchester, MO, just outside of St. Louis, to visit my husband’s paternal grandparents. We enjoyed great conversation, sub sandwiches and I was surprised with a birthday cake! The weather was nice enough to eat outside on their deck to watch birds and see a family of raccoons eat the food that Thom’s grandparents put out for them. While we were there, we took advantage of an internet connection and booked a hotel.

After our visit, we headed to the city and to our just-booked hotel, the Extended Stay America. It was so hot in the city that it melted the glue stick that I’ve been using for our Smash Book

! Once we settled in, we ventured into the city to find a birthday salad, passing by the Gateway Arch and finding our way to a segment of Route 66 that was in use from 1926-1933. The alignment of Route 66 in St. Louis has changed over the course of the years and is quite confusing to follow. Route 66 was based on the bridge was primarily being used and the route was moved as the city was being built. 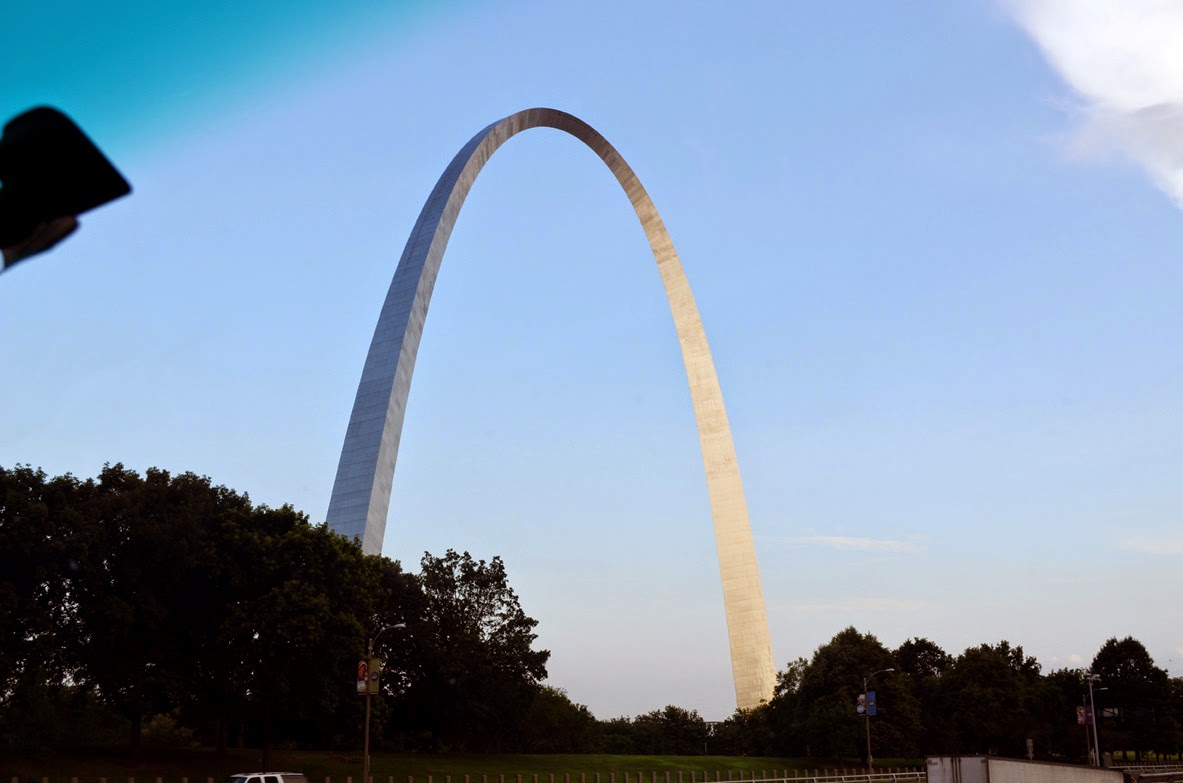 We didn’t stop by the famous, Ted Drews for frozen custard. We didn’t even pick up a gooey butter cake! (What kind of tourists are we!?) Instead, we had a burger at Carl’s Drive-In. The place was quaint 1950’s era diner to get there. It was pouring rain — so much so that the visibility was poor and we barely crawled on the highway. Of course, other cars (locals) were zooming by us San Diegans who don’t ever experience rain like this. We visited my husband’s grandmother in the assisted living facility where his mother was waiting for us with lasagna and (surprise) another birthday cake! We filled our bellies, played scrabble and had to cut our visit short since grandma was getting tired (plus we had to get on the road). On the way out, I spotted a piano and entertained the residents with the “Maple Leaf Rag” — which was fitting, since Scott Joplin was from Missouri. 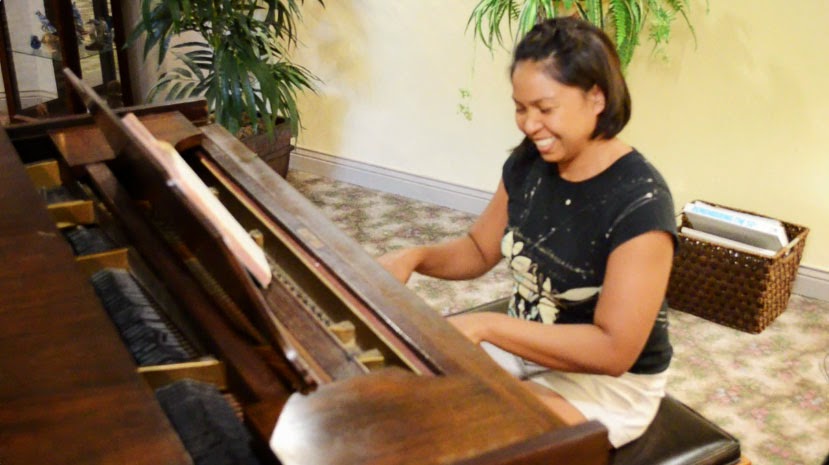 More heavy rain came our way but we safely made it to Kansas City, MO where we stayed at Thom’s childhood home. We threw in a load of laundry and walked over to the church for Sunday Vigil Mass with the in-laws. After Mass we had dinner 54th Street Grill & Bar. The food was pretty tasty — and there’s a reason why “grill” comes before “bar” in the name. The food is not your typical bar food, they offered a variety of sandwiches and wraps and also had the obligatory BBQ options all for a reasonable price.

This would be our last night in Missouri. We discovered a lot of places and history about the state. As techy as we are, we relied on paper maps since it was tough to get GPS data in a lot of locations. It was hard to believe that we had 8 more days of traveling!

Next Up: Destination: Rocky Mountain National Park (oh, and Kansas, too)