Our last night camping by Zion National Park was quite exciting. As expected a storm came through and the lightning and thunder put on quite a show. Through the tent, we could see the flash of lightning move across the sky and the thunder immediately followed it. Thom and I were amazed that the kids slept through the whole thing. I was concerned that we would be packing up a wet campsite. But just like the previous morning, the site was dry with only a little dampness. It started to warm up early in the morning and we were happy to get back on the road before it got really hot. We bid farewell to our camping neighbors and the kids were slightly disappointed that we would not cross paths with the family again during the trip.

Our next destination was to a friend’s house in Sandy, UT on the outskirts of Salt Lake City.  We headed out of the park and stopped at some roadside attractions and a “mom and pop” rock shop where the kids got to pick up some items.

We were getting restless and hungry so we stopped at the Cove Fort for lunch. There was a large grassy area with picnic benches and what looked like a community grill. The whole area was very clean and charming. Even the bathrooms had music playing outside the building! It was a perfect spot to make lunches. We would have stopped to visit the actual fort, but they wanted you to stay and watch the half-hour video before entering. We just didn’t have time for that.

The blogging community has been so wonderful to me and I’m blessed to have met new people and become friends with many of them, including Dorothy of Powder Room Playground, who graciously opened her beautiful home to us on our trip. She and her husband, Stan, have two girls at home with them, both around our girls’ age with maybe a year or two age difference. My oldest introduced their oldest to Minecraft while the two “youngers” watched “Frozen” in the basement. We had dinner then chatted until night time. It was nice to sleep in a bed and get our clothes clean — especially since there was a storm outside.

We had a brief stay and had to say, “goodbye” and “see you soon” in the morning. Although our kids didn’t want to leave, they looked forward to their family’s move back to San Diego in a month. Stan gave Thom some advice on more routes into Yellowstone and we were on our way.

Getting to Idaho and Wyoming

We dodged a few aggressive drivers in Utah and crossed into Idaho via I-15 north. We passed through tiny towns where we took pics of some cool dilapidated buildings. Our turnoff was US-30 east which led through Caribou National Forest.  We did not spot caribou but did see a lot of cows.

Along the road were signs for “historical point of interest” which usually led to another sign full of text pointing out the significance of the area. We learned that we were following the Oregon Trail as well as the gold rush mining route.

Entering Wyoming, we followed the state line north and took WY-239 east to WY-89 north, and goes through Targhee National Forest. There was a lot of white river rafting in the Snake River, which the highway follows into Jackson. Jackson was busy town. It serves as the gateway into the Bridger-Teton National Forest. We had to take an obligatory photo of the elkhorn arches in the town square.  According to the plaque by the horns, the elk shed their horns and the Boy Scouts go through the forest to collect them. The horn are auctioned off in the town square during Elk Fest in May. 75% of the proceeds go to the National Elk Refuge (pretty cool, huh?) and the rest go to the Boy Scouts. 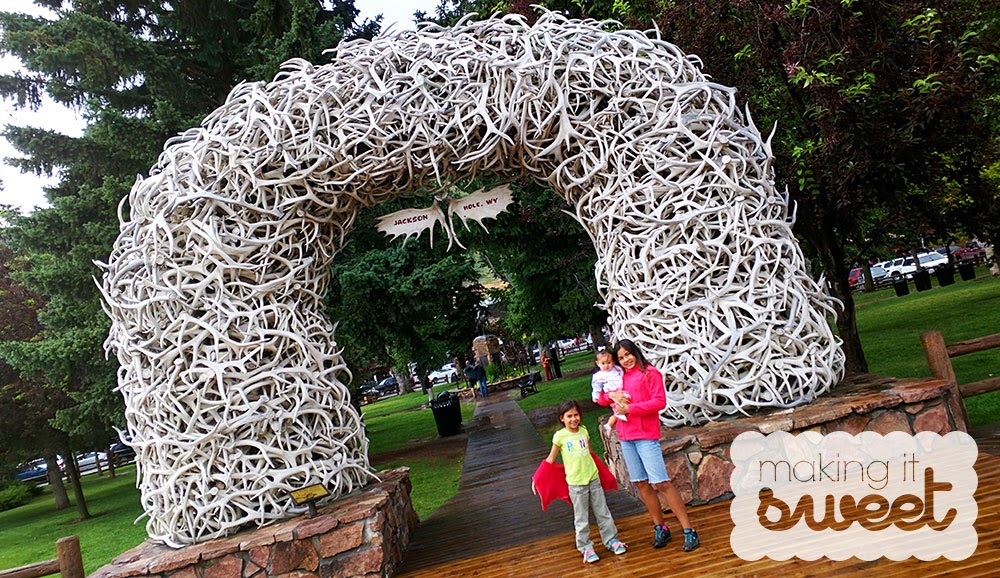 So my question was… is the town called Jackson or Jackson Hole? 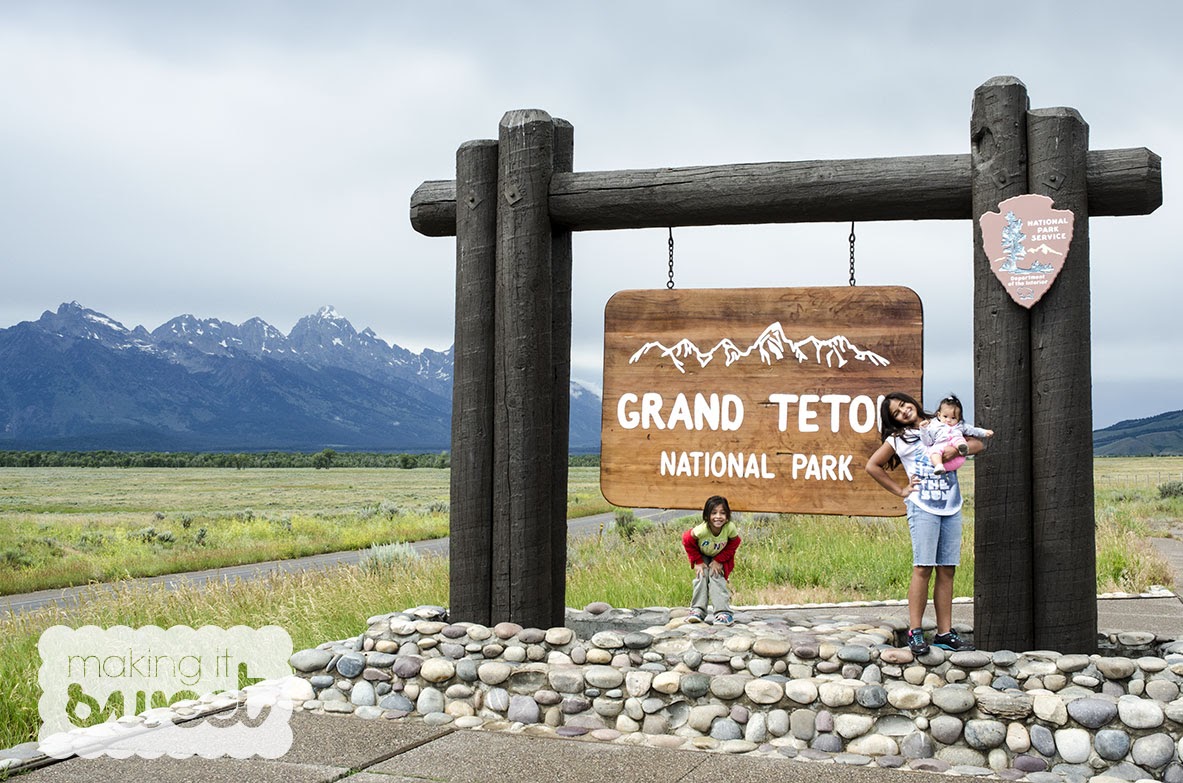 Our plan was to drive through Grand Teton National Park to get to the south entrance of Yellowstone National Park. It’s like getting a 2-for-1 deal. Grand Teton NP is beautiful. The gunmetal-colored mountains accented with white glaciers suddenly rise out of grassy plains. The Teton mountains are formed by a fault block. As the earth shifts, the mountain rises and the valley sinks at its base, creating the stunning view. 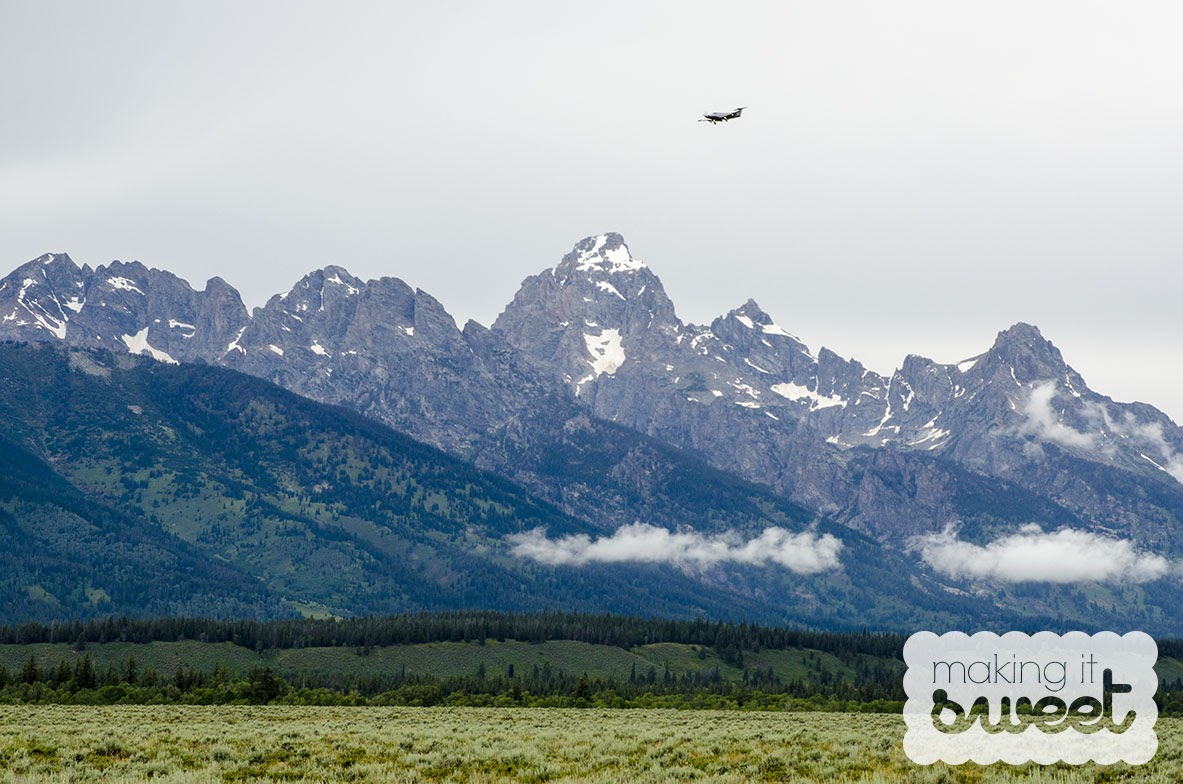 In the park, while admiring the landscape, we were able to catch a glimpse of the heaviest living bird native to North America—the trumpeter swan—gracefully floating across a lake. 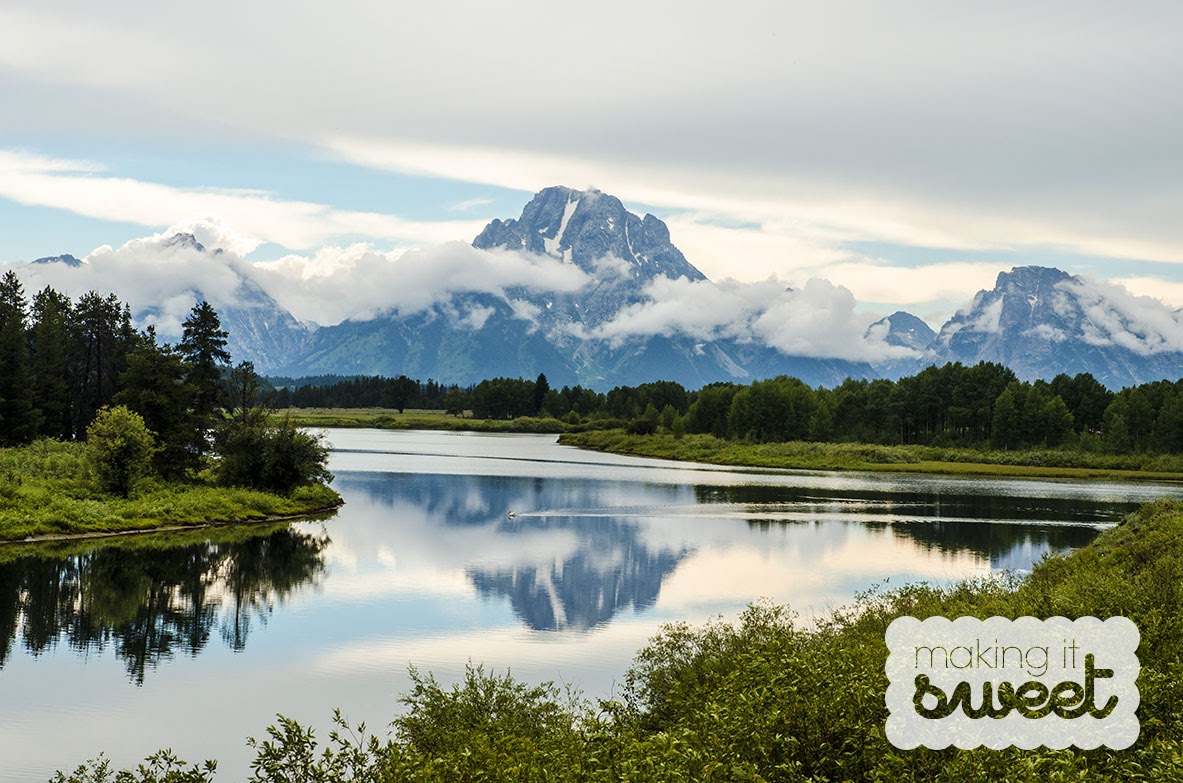 We entered Yellowstone National Park through an un-manned booth at the south entrance. It said that we were able to pass for free and to expect to pay a fee when we exit. The main road in Yellowstone is divided into northern and southern loops that form a figure 8.  I knew we were in Yellowstone as soon as I smelled the sulphur in the air. We drove along the eastern half of the southern Grand Loop to get to our campsite. Along the way we saw steam vents, elk and bison. Some people came dangerously close to the bison in order to take a photo. It’s no wonder that bison-related injuries are up this year! 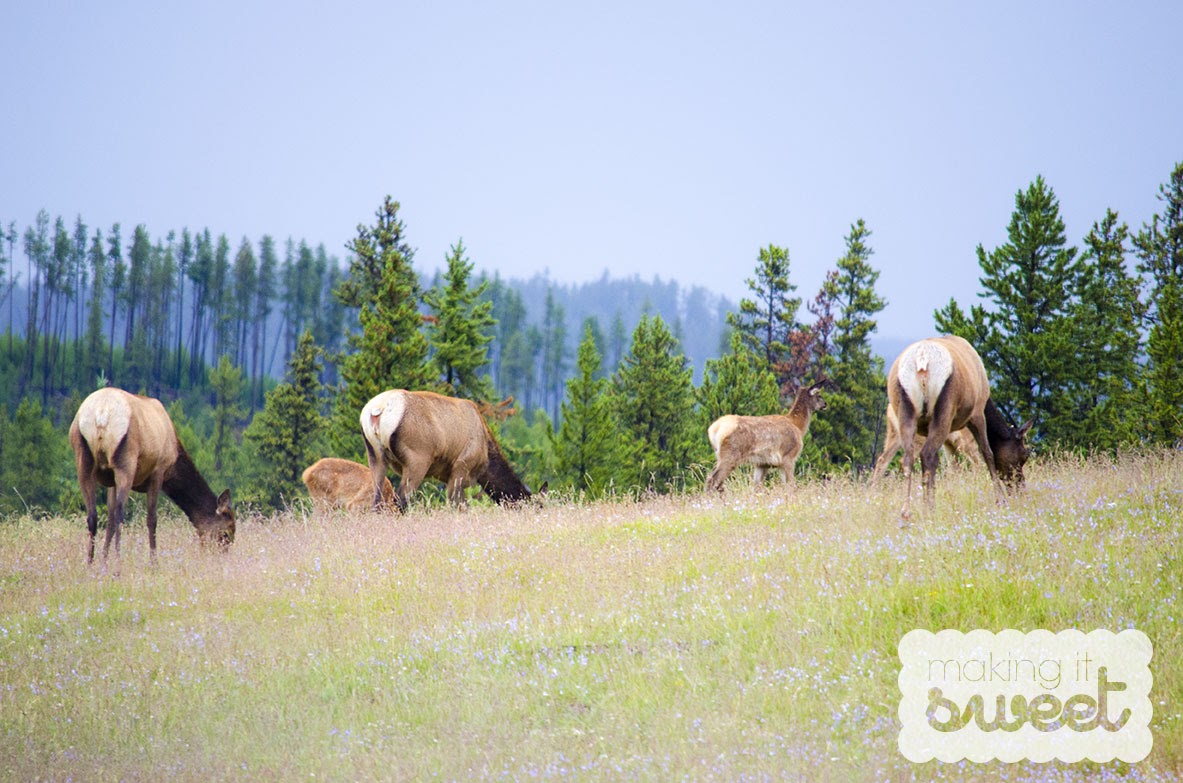 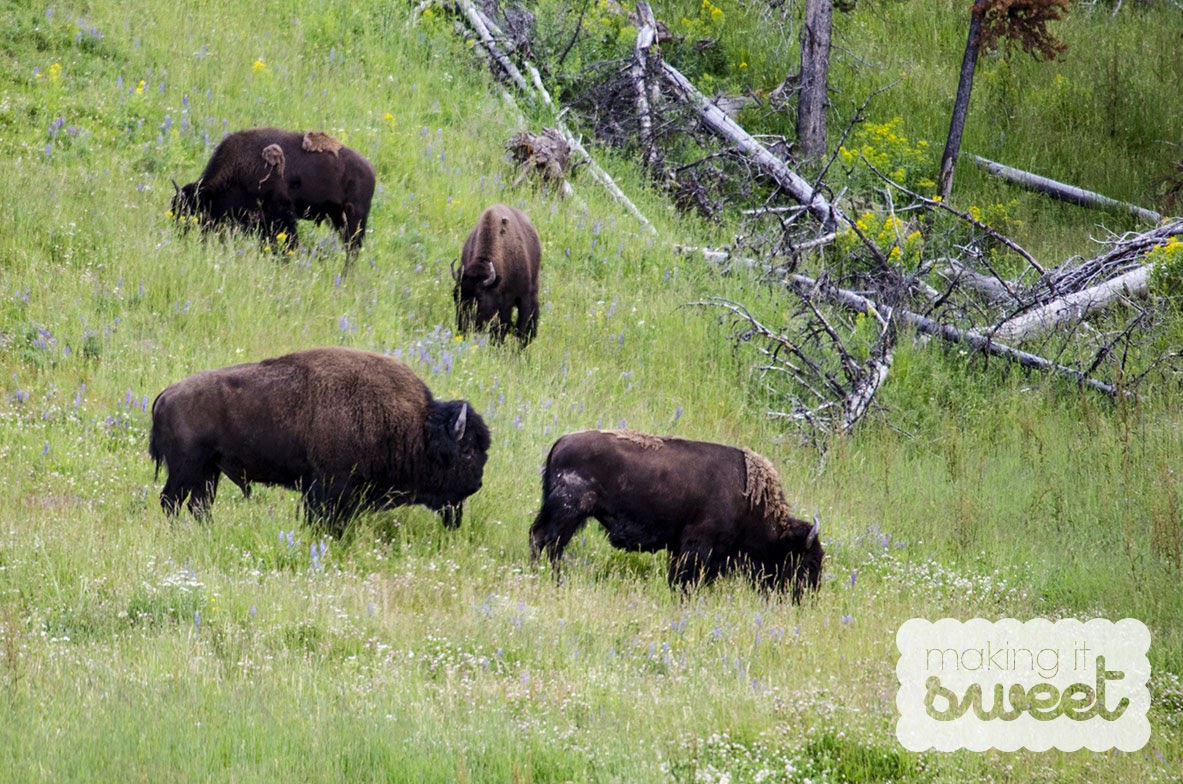 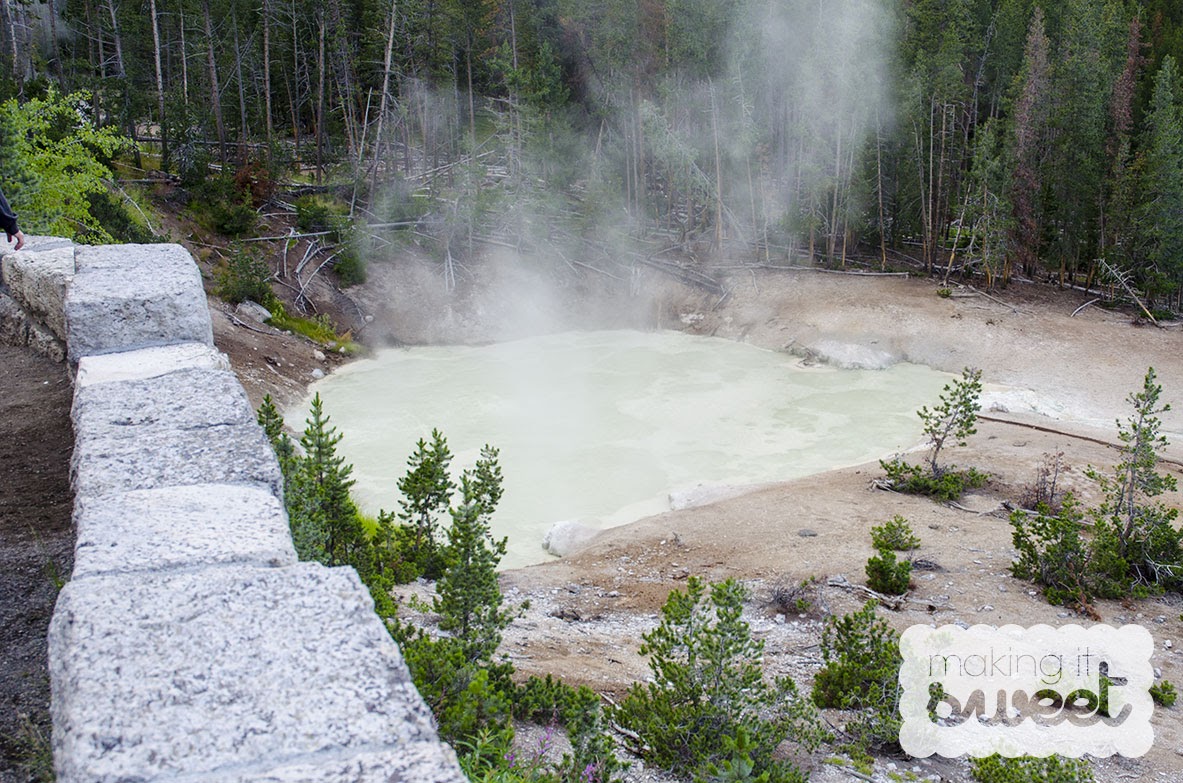 It took us a good hour and a half after the entrance to reach our campsite in Canyon Village and we arrived at about 7:30pm. Canyon Village is located on the east side of Yellowstone, right where the northern loop meets the southern loop. I was lucky to book this site a few weeks prior to the trip — It was the last tent site that they had! Our site, #115 on Loop D, was located conveniently across from the restrooms. Showers were located in the same building as the registration area at the camp entrance and were monitored by a check-off card. The showers are free for kids under 5 and we were allowed a total of six complimentary showers during our stay for three nights (no time limit, though). Extra showers could be purchased for about $4.

We quickly set up camp and were nestled in the pine trees which gave a sense of privacy. I made beef stew for dinner. It was surely needed since the weather got cold as the sun went down. We knew we were in for a cold night and were fully expecting it. How cold — we didn’t quite know. All reviews said to expect temperatures in the 30s and 40s in the night because of the high altitude. Some said that is can snow even in July! So we double-layered and cuddled up for the night… it was going to be a rough one.

NEXT: Exploring Yellowstone in Two Days

One thought on “2015 Road Trip: Sandy, UT to Grand Teton and Yellowstone”