FREEZING. That’s how I sum up our first night in Yellowstone. It was so cold that we didn’t want to get out from under our sleeping bags. It was too cold to try to make breakfast or even a hot cup of coffee. It was definitely in the upper 30’s. Thom suggested we get in our clothes for the day and head out to explore Yellowstone. The idea was that we’d warm up in the van, then stop somewhere to make breakfast once the weather got a little warmer. Begrudgingly, we all got dressed from warm pants to cold pants.

The southern loop of Yellowstone is marked by geysers, steam vents, hot springs — most of the major attractions that the park is known for. We started heading west to loop counter-clockwise. Our first stop was Artist Paintpots. It was an easy, short hike to get to the “paint pots.” The boardwalk wound through an area that had small pools of various shades of blue, yellow and even white mud pots. Some of the springs were quite active and bubbly. I was fascinated with the mud pots that made the unmistakeable “bloop” sound as it bubbled up and tossed mud around the perimeter of the pool. It was a nice taste of what was to come in the park. 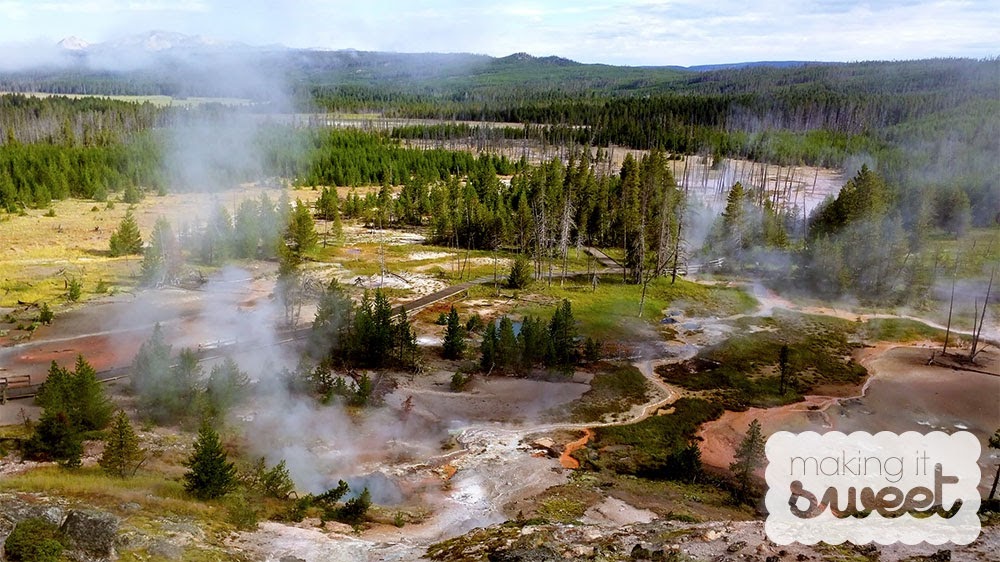 At the top of Artist Paintpots 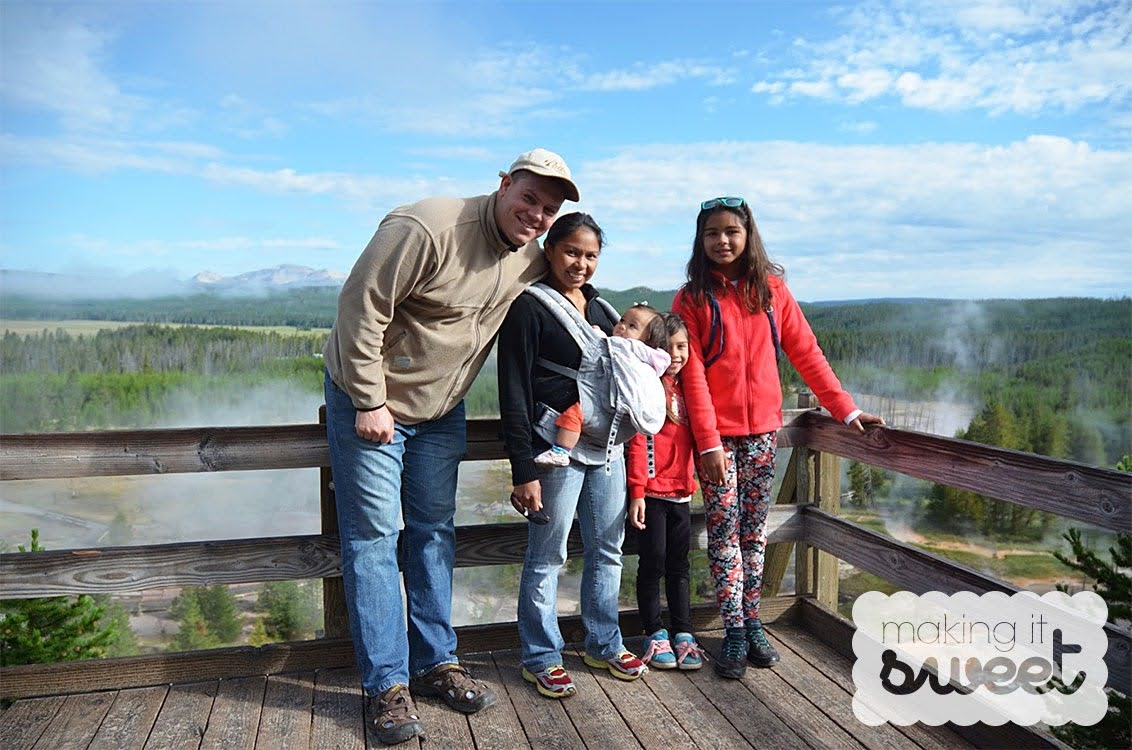 Happy to warm up (just a little)

Along the route there were some smaller, one-way roads that led closer to other features such as Gibbon Falls. Another route, Firehole Canyon Drive, went alongside a river that winds through a canyon formed by volcanic rock. 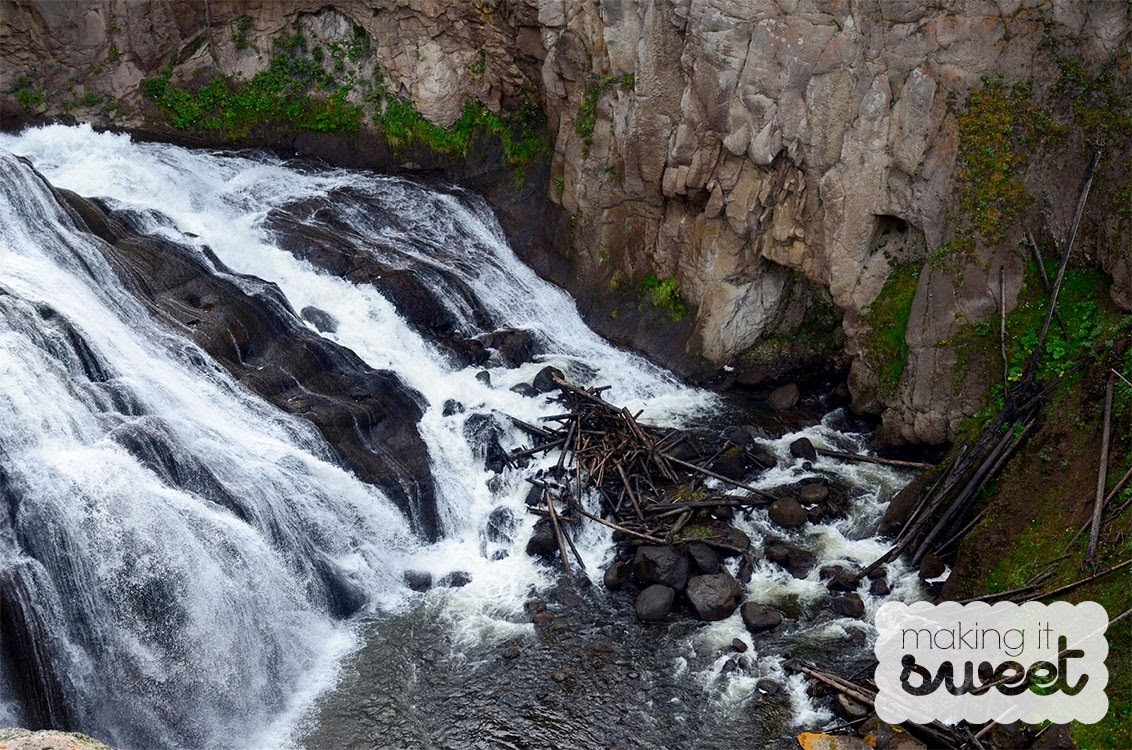 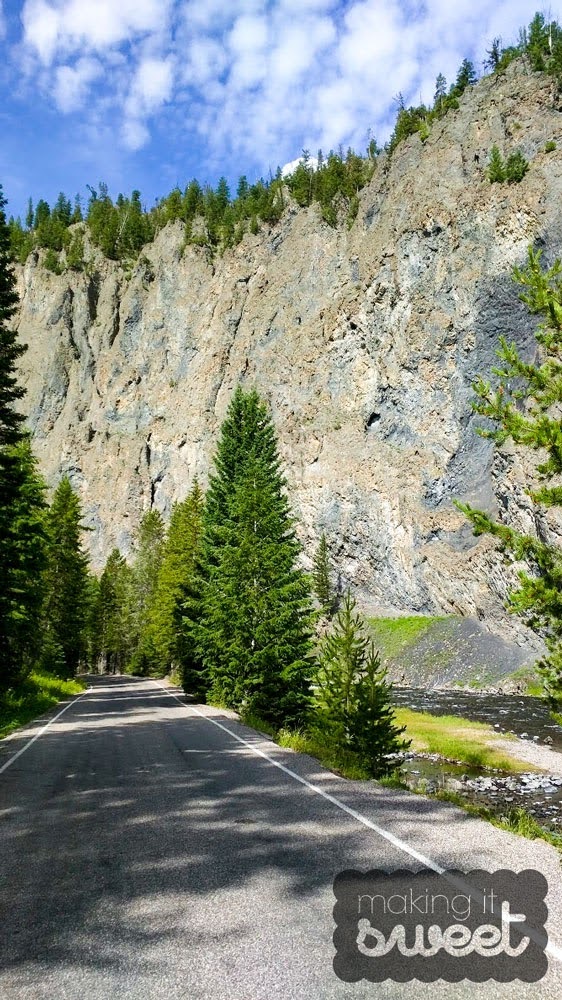 The next major stop was Midway Geyser. It was cold out and the only warmth we got emanated from the steam coming off the boiling pools. The Midway Geyser area is where you can see spectacular pools — such as the colorful, Grand Prismatic pool. However, it was so cold that we could only get a peek at the colors of the pool through breaks in the steam.

Panorama of the Grand Prismatic Pool at Midway Geyser 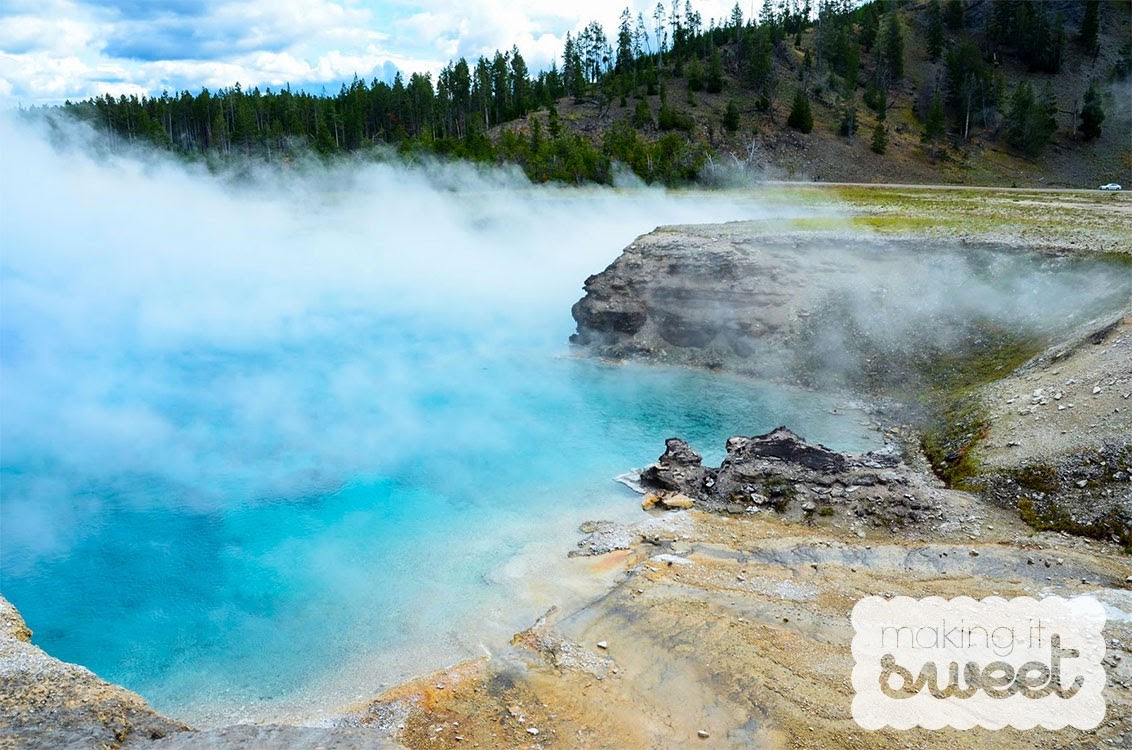 We finally made it to Old Faithful. At this point, we were hungry and cold. We walked to the visitors center where they posted the estimated time for the next eruption – 12:35pm. Since we had over a little hour until the next eruption, we watched a video about Yellowstone in the theatre then got coffee and hot cocoa at the cafe across the street. It was perfect timing. Once we left the cafe, Thom had just enough time to set up the tripod before the geyser started gurgling. Old Faithful was true to it’s name. It started to get more active at 12:33pm with a full eruption at 12:34pm! The eruption hadn’t fully stopped and people were already leaving the viewing area — what an impatient society we have! 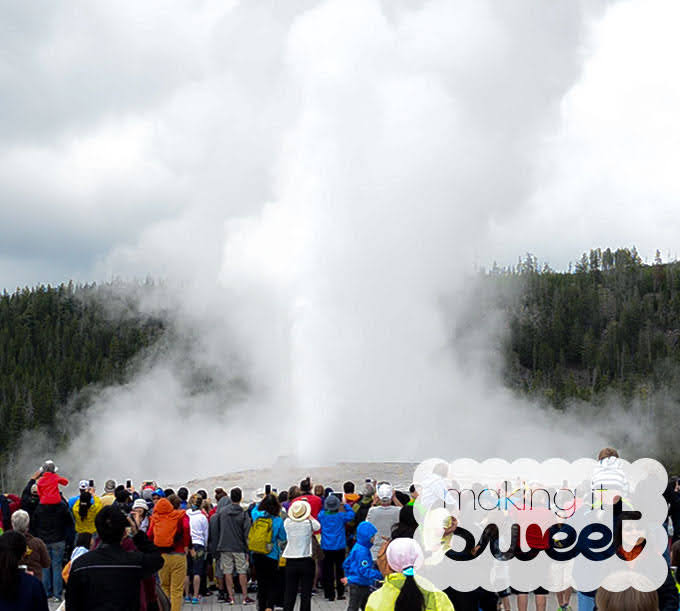 The kids decided to cough up $3 each to do the Junior Ranger program. Yes, Yellowstone charges for their Junior Ranger program! Instead of a badge, you get a patch once the booklets are completed. The activity book is a bit nicer and a little bigger. The kids were glad to have a day and a half to complete it.

Still hungry, we went to the parking lot and made sandwiches in the back of the van. After paying $5 for 1 cup of coffee and 1 cup of hot cocoa (and seeing a couple in front of us pay $44.90 for two meals and an extra cappuccino), eating in the parking lot was a smart move. We weren’t alone. There were at least three other groups around us doing the same thing.

We took a hike around the Old Faithful area and were able to spot the unpredictable Grand Geyser erupt. The Grand Geyser shoots very high into the air and goes on for quite a while. The pools around the area were unique and fascinating. Towards the end of the trail, we were able to spot Old Faithful erupt again, this time from afar. All of us were pretty tired and sore from walking but mustered enough energy to take a look at the Old Faithful Inn, where Thom’s mother worked in the 90’s. 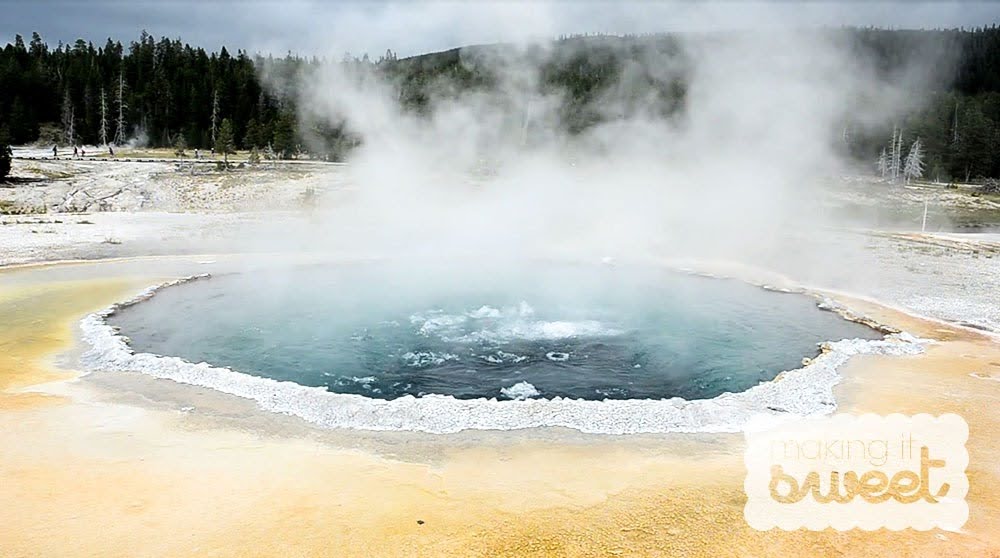 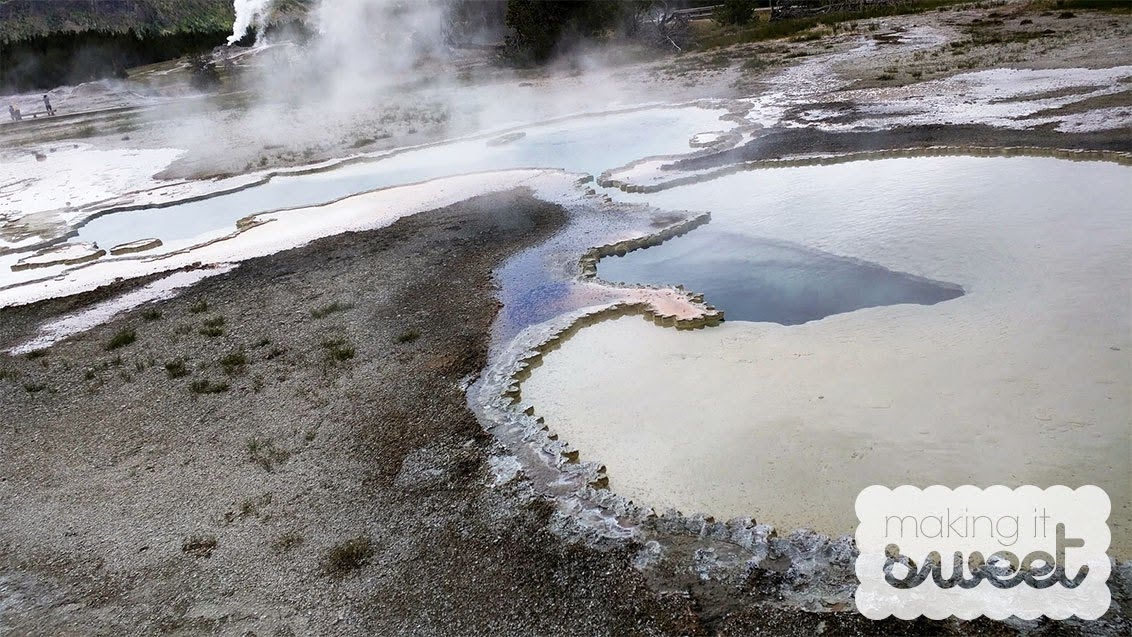 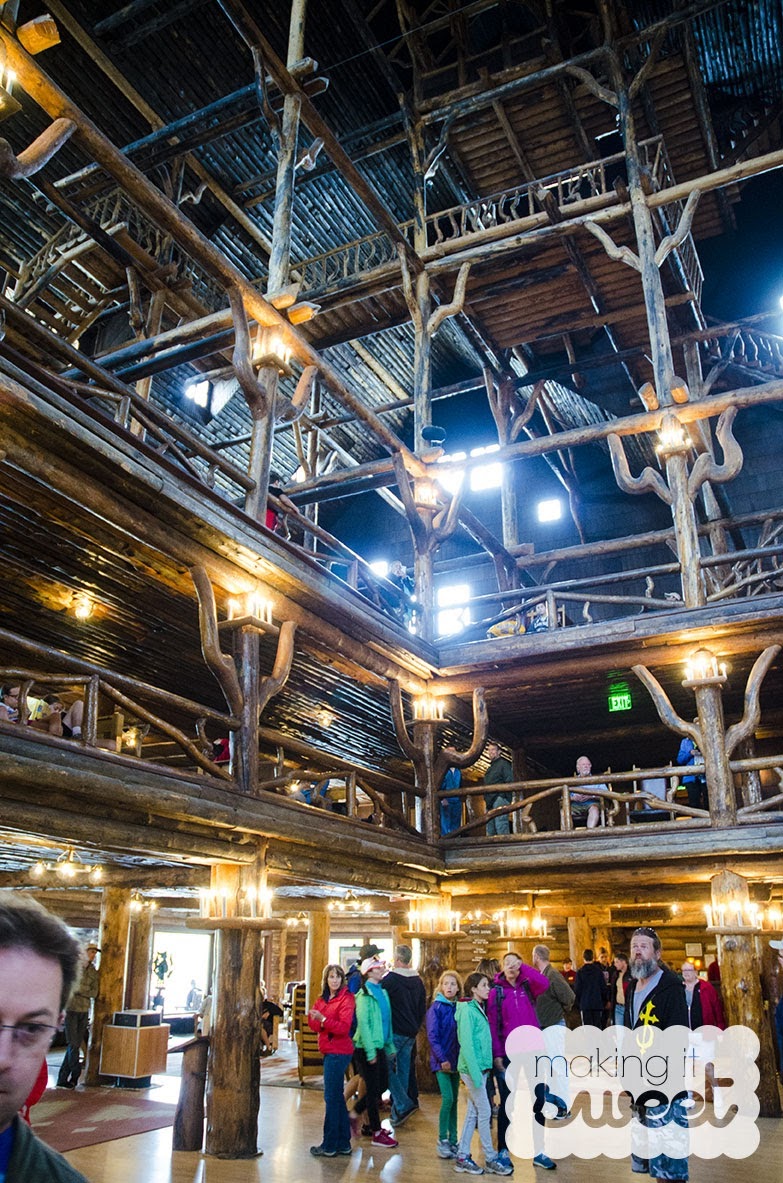 We made our way around the rest of the southern Grand Loop and spotted a wolf! It’s considered a rare sighting since there are under 125 wolves in the massive park. Our last stop was at Artists Point, where you can get a great view of the “Grand Canyon of Yellowstone” and the Lower Falls. THIS is probably where Yellowstone got its name. The rocks were yellow with spots of red and white, formed by ancient steam vents. 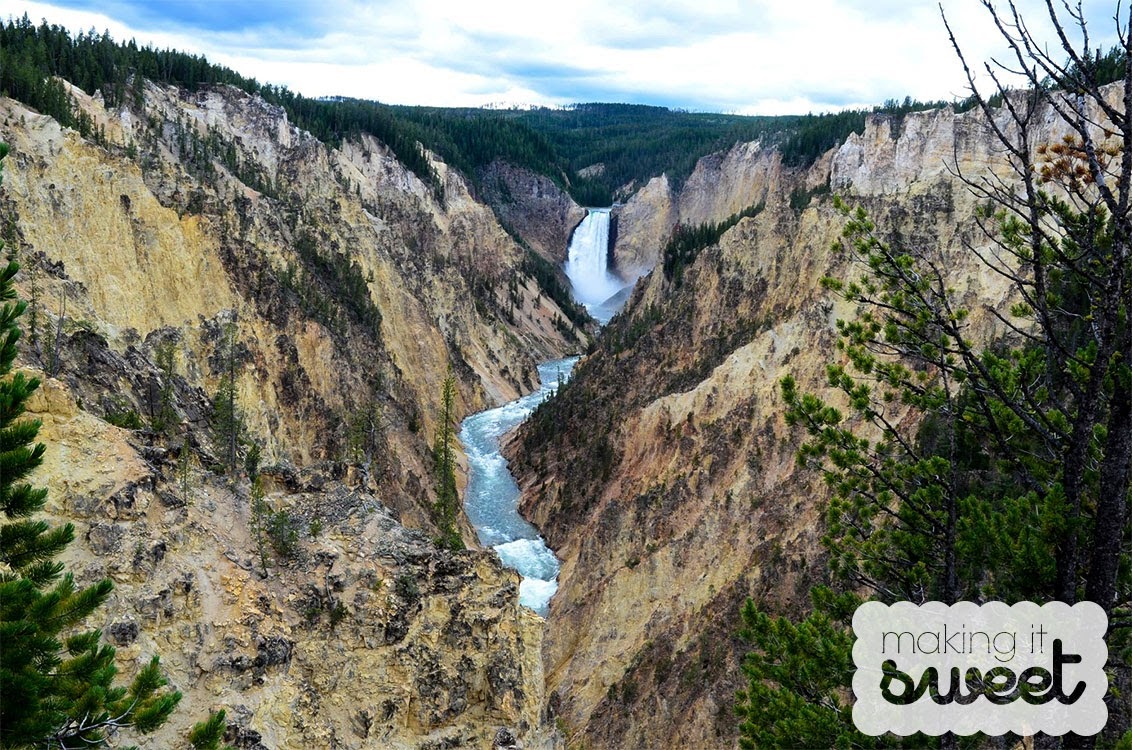 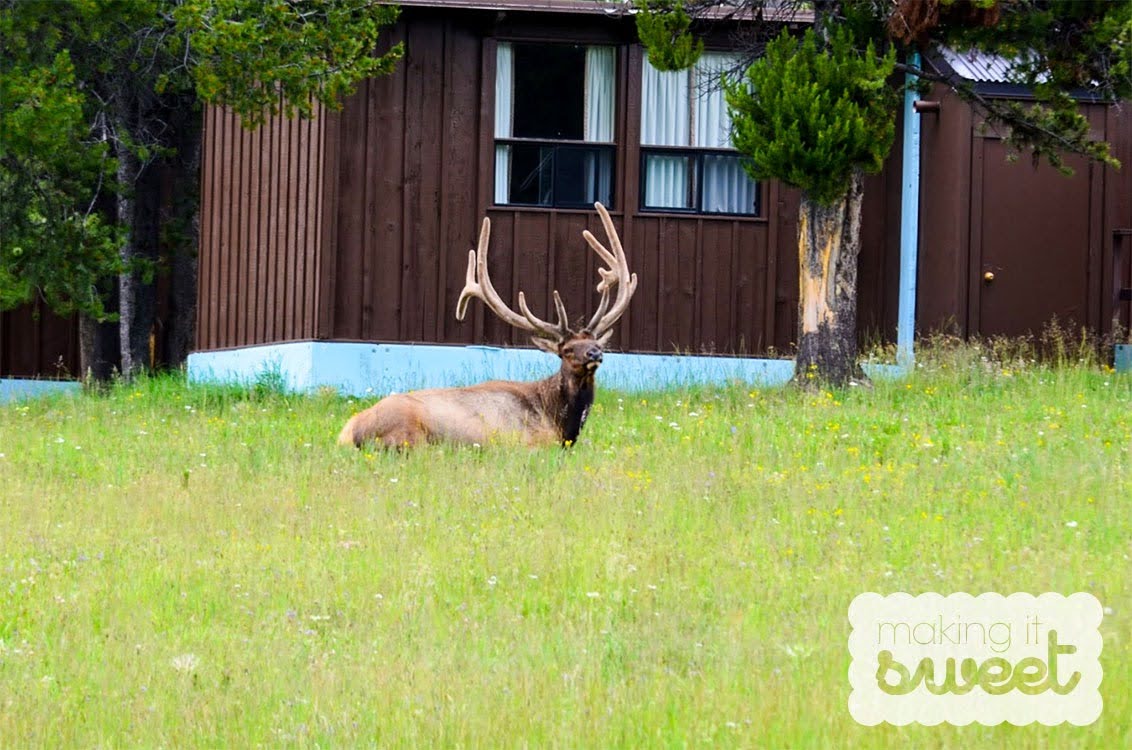 Back at the campsite, the kids filled out their Jr. Ranger books while I prepared a tamale pie. It was nice to be under a screened tent since I’m pretty sure we’d be eaten by mosquitos. A shower was in order for all of us and immediately after, we caught a ranger program at 9:30pm in the Canyon Visitors Center. The park ranger was so enthusiastic about her subject that the program went on long and we didn’t get to bed until 11:00pm.

Knowing how cold the previous night was, the kids were more cooperative when settling down for the night. We spent some time bundling up and made up for our unpreparedness by improvising a hat out of a t-shirt and gloves out of (clean) socks. We laughed at ourselves but we knew it would really help us through the night.

We had another chilly night and again, were too cold to make coffee and breakfast. So we got dressed and piled in the van again to warm up and get started on the northern loop. The northern loop is known for the landscape and a variety of animals that can be spotted. Hopefully, being out early would help us see more animals… maybe a bear. 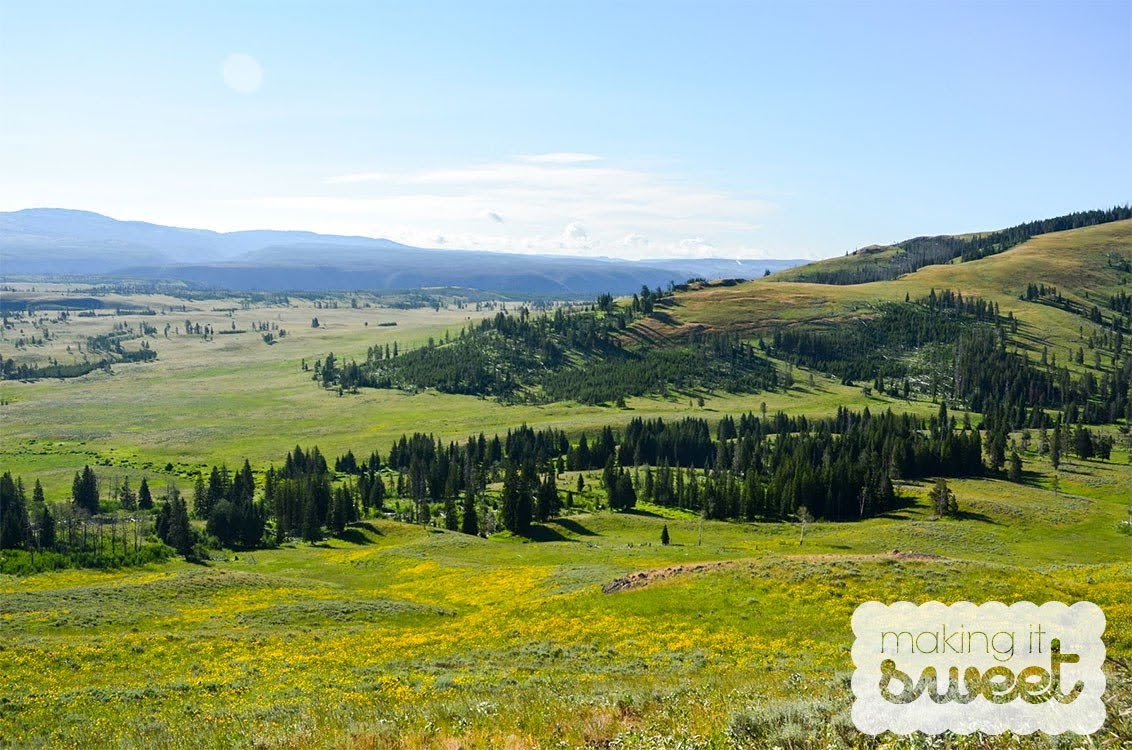 Our first stop was at Tower Falls where we ate breakfast in the parking lot then followed it with a short hike to view the falls. The location was named after the tower-like formations flanking the waterfall. 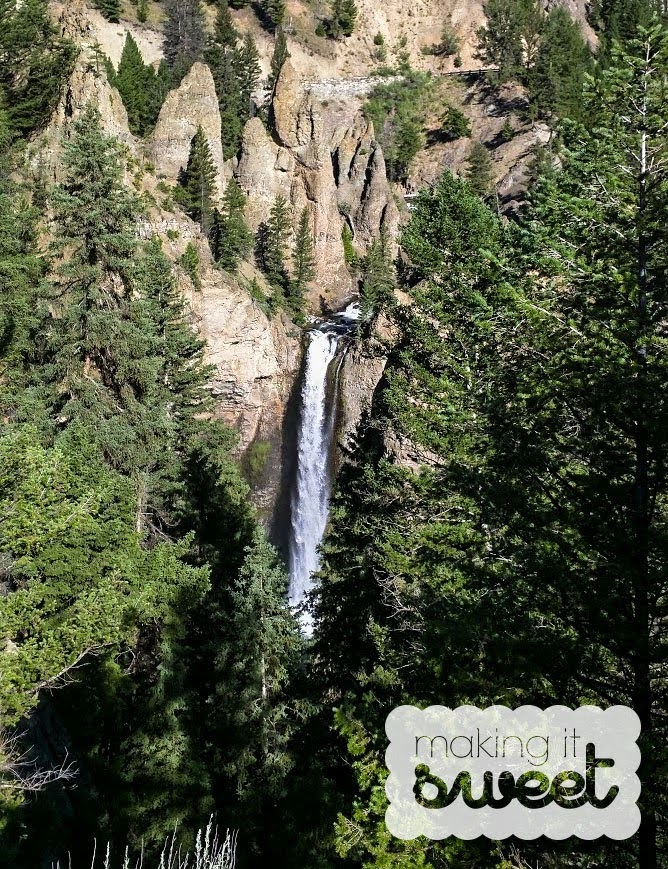 Continuing on the drive, we kept our eyes peeled for bears. In a large meadow, we spotted a lone pronghorn. We saw a sign for a Petrified Tree and followed the road that led to it. It was what it was… a sad looking petrified tree. We didn’t think it was worth walking up to and kept going. 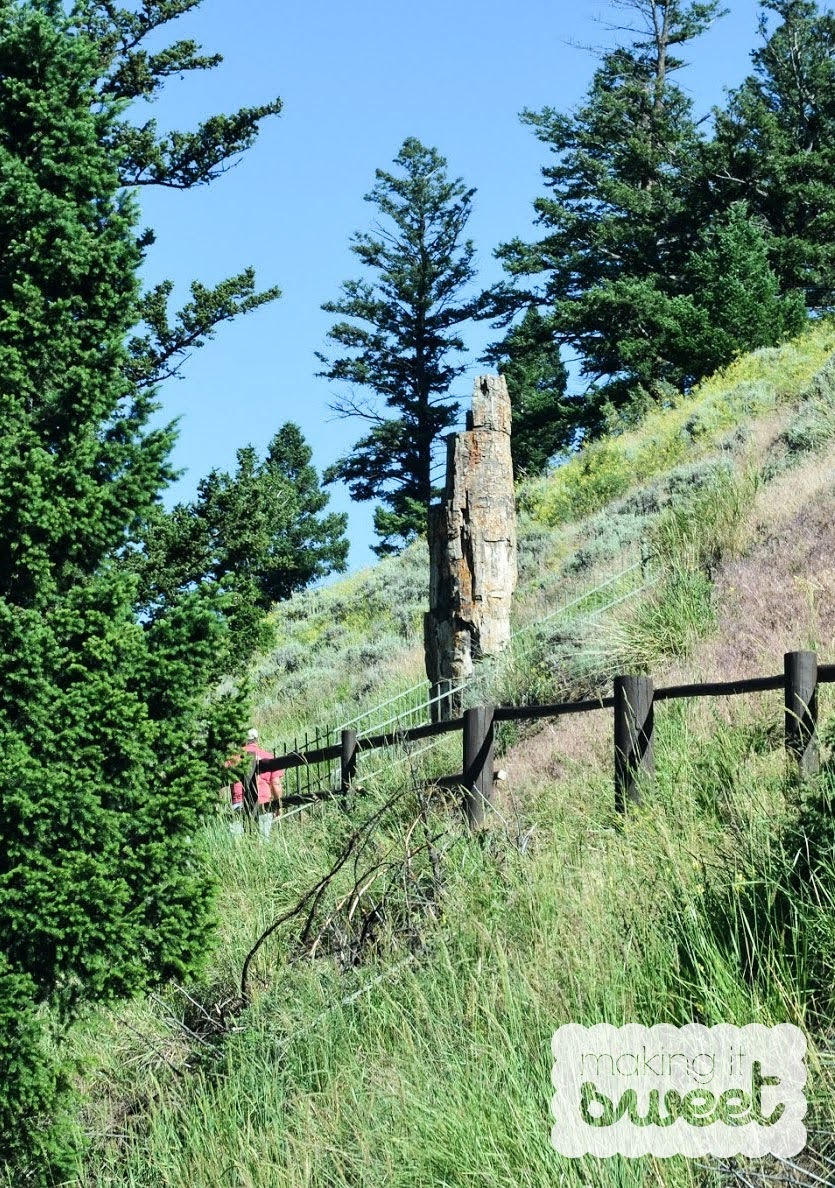 The petrified tree, all by it’s lonesome

There was a sign for a 6-mile drive at Blacktail Plateau. It was an unpaved road through scenic hills. We spotted three female elk at the top of one of the hills. The road dropped us back near the petrified tree. 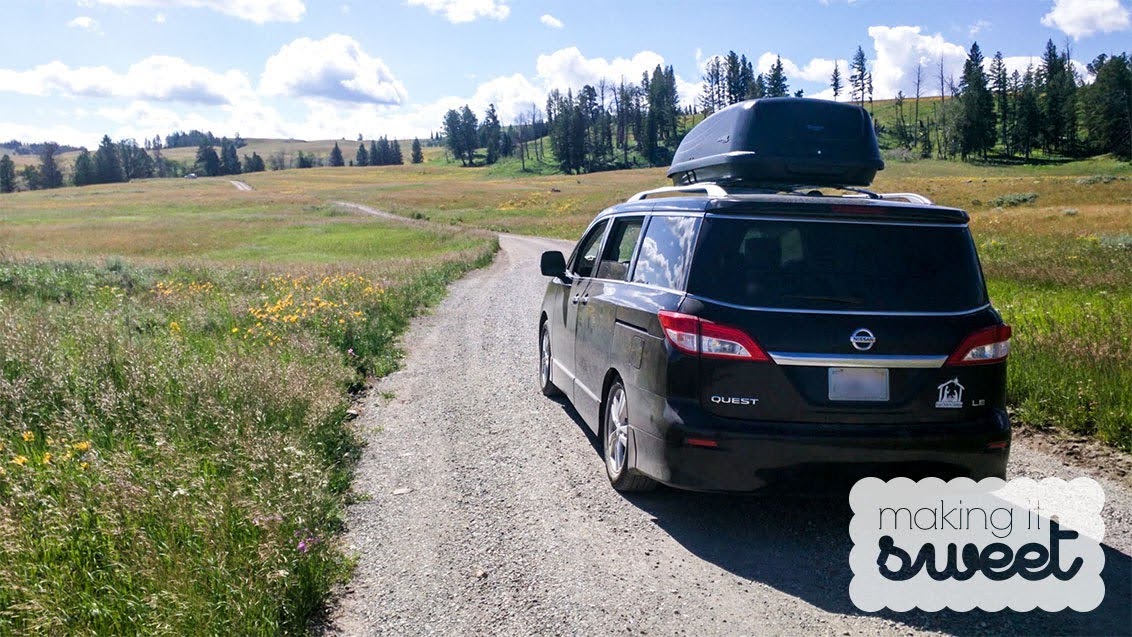 We made our way towards Mammoth Hot Springs and parked next to some old army barracks near the visitors center. We made sandwiches for lunch and walked to the visitors center so the kids could claim their Junior Ranger patches. At the hot springs, we spotted two female elk eating grass next to an inactive spring. Mammoth Hot Springs is quite a sight to see.  It’s terraces of calcification formed from the spring above. Some have said it’s mostly dried up, I say that it’s just changing course. We viewed the hot springs from below then took the trail to the top where we were met with resistance from Mya (our oldest) who was getting tired of all the walking. It was getting to be a long day and we needed to make our way back to camp in order to attend Mass for the Sunday vigil. On our way back we kept our eyes peeled for more animals (disappointed that we didn’t see many) and only spotted “something brown on four legs” in the hills.

Back at camp, the wind started to pick up and we could hear thunder from afar. We staked down our screen tent and hunkered down as the rain started to fall. It was only a short rain and it stopped in time to make it to Mass at the Canyon Outdoor Amphitheater. The celebrant at Mass was a Jesuit priest from St. Anthony of Padua in Cody, WY. He was a very exuberant and dynamic preacher.  Even though the thunder boomed around us and the wind brushed and bent the trees, rain did not fall. It was only when Mass ended that big drops started to fall out of the sky. God gave us a chance to spend time to worship! 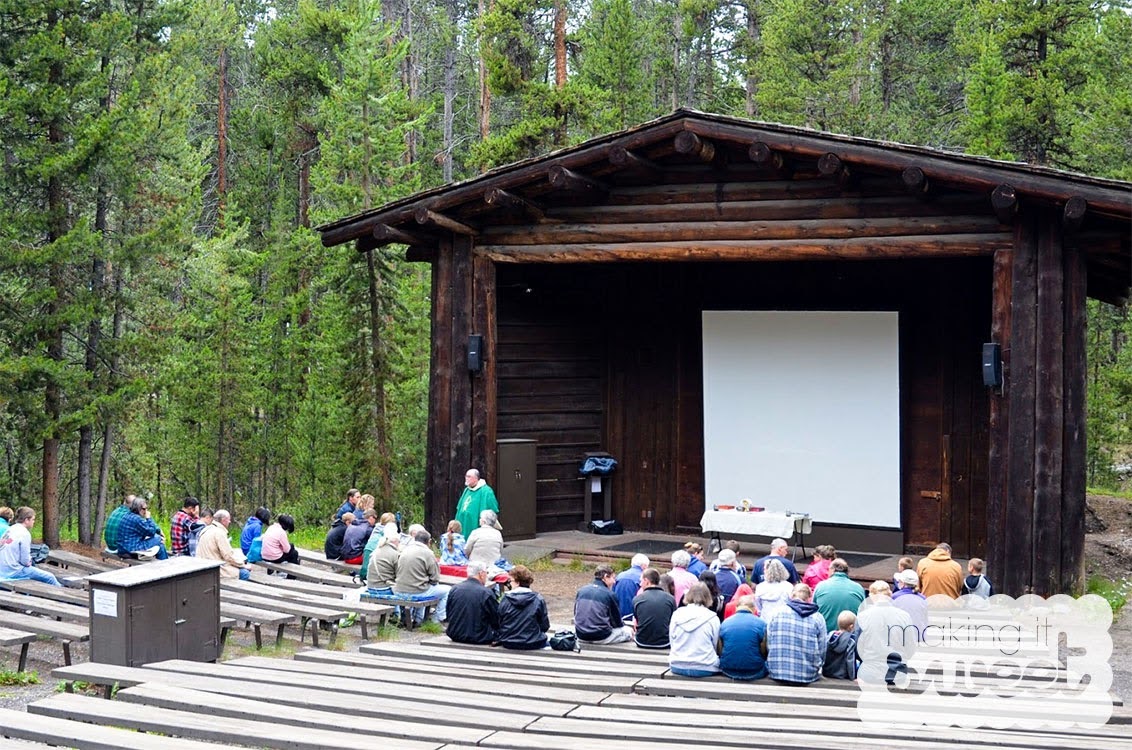 Mass at the Canyon Outdoor Amphitheater

After Mass, we used our last bath entries after dinner and partially broke down camp, knowing that we’d leave as soon as we got up. The next day we’d say, “goodbye” to Yellowstone.

NEXT: Devil’s Tower, Mt. Rushmore and The Badlands

This error message is only visible to WordPress admins