I recently met up with my San Diego Filipino Blogger Network at Trade Winds Tavern in the Kearny Mesa area of San Diego. This part of town is a concentration of car dealerships, production industries, and—perhaps most renowned— it’s variety of hip Asian stores, markets and restaurants (predominantly Korean, Japanese, Chinese, and Vietnamese). Trade Winds Tavern is introducing an Asian gastropub concept to the Convoy area. It’s located in an unassuming two-business strip mall (if you even want to call it that) but not hard to miss with its large mural of a tatooed woman with flowing blue hair.

I was introduced to Sylvia Le, the proprietor of the restaurant and immediately felt like we were BFFs. As we pored over the menu, she would point out items with excitement and passion, giving us a backstory to each one. She mentioned how the chefs’ diverse backgrounds inspired the menu, giving it a Vietnamese, Filipino, Hawaiian and American fusion. 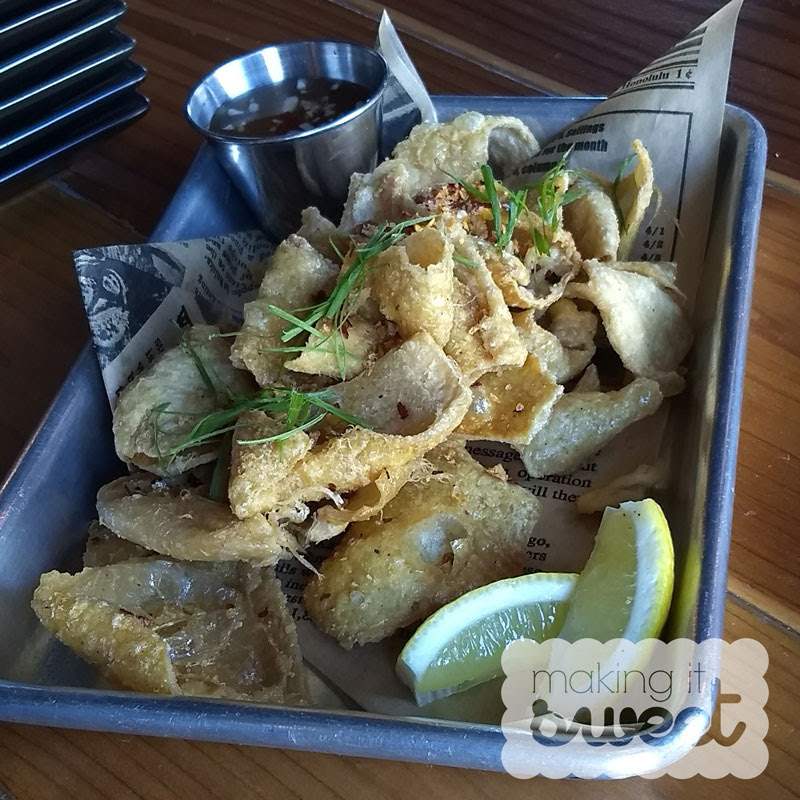 We were first given a plate of Filipino-inspired chicken chicharron. The dipping sauce was a slightly more vinegary Vietnamese nuoc mam cham, instead of the traditional garlic and vinegar that would be served alongside pork chicharron. This little appetizer was not unfamiliar to me.  When my dad cooked for a crowd (which was often) he’d throw the chicken skins into the wok so not to waste them. My sister and I would devour the crunchy bits as he continued to cook the rest of the food. Chicken chicharron is quite different in texture to pork chicharron. It has a finer crunch and a more robust flavor. I’ll admit that it was hard to share this dish — I kind of wanted the whole plate to myself. 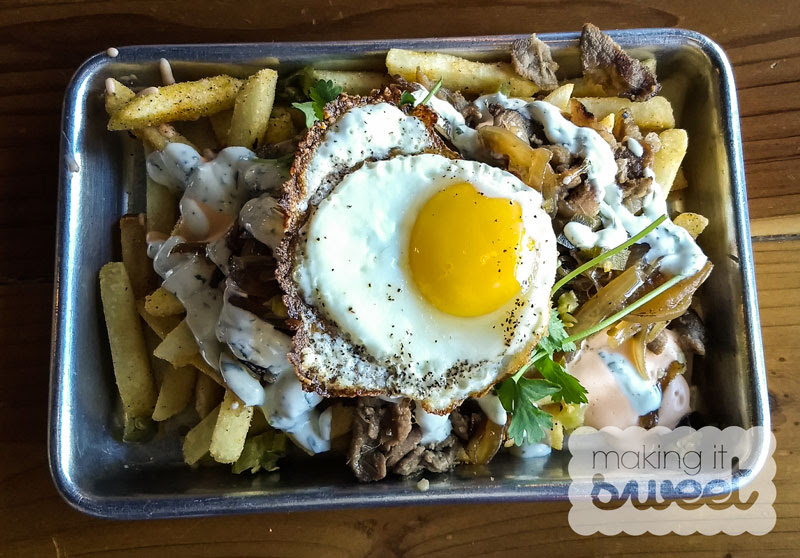 Next up was the “Dirty Fries” made “extra filthy” with a sunny side up egg on top. I equated this to the Asian/Pacific Islander version of Carne Asada fries. The fries were topped with a house-made cheese sauce, cilantro créme fraîche, slivers of a sweet Vietnamese grilled pork, grilled onions, pickled jalapeño and a sunny side up egg. Breaking into the egg allowed the yolk to ooze into every crevice, giving the fries an extra richness to it’s already bold flavors. It was salty, sweet chewy, crunchy all at once — so many things were going on. I’m still thinking about them and it’s been a few days! 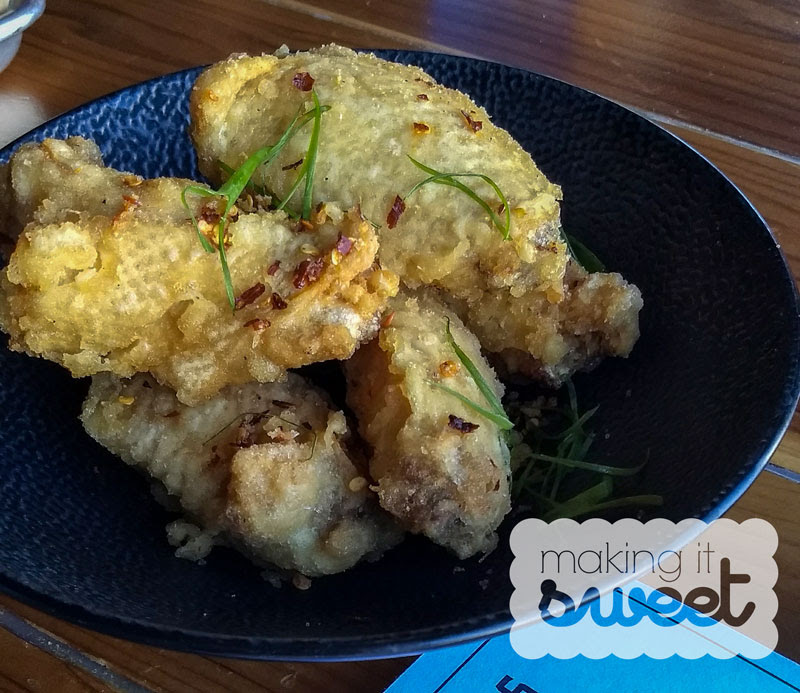 Salt and Pepper wings did not disappoint. While some restaurants will sacrifice juiciness for crispness in their salt and pepper wings, Trade Winds Tavern’s wings were nice and meaty yet still maintained the sought-after salty crunch on the outside. 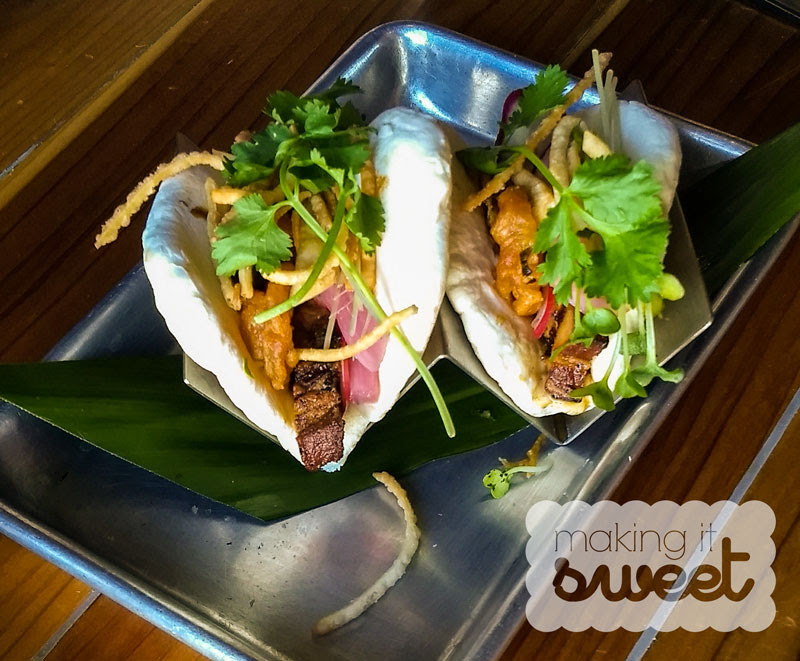 The pork belly bao buns combined a house-made steamed bun with juicy duroc pork belly topped with crunchy wontons, pickled onion, fried jalapeño and cilantro. The flavors and textures are a wonderful combo with a bit of heat from the jalapeño while the pillowy bao served as a nice, neutral backdrop to allow the other flavors to speak for themselves. 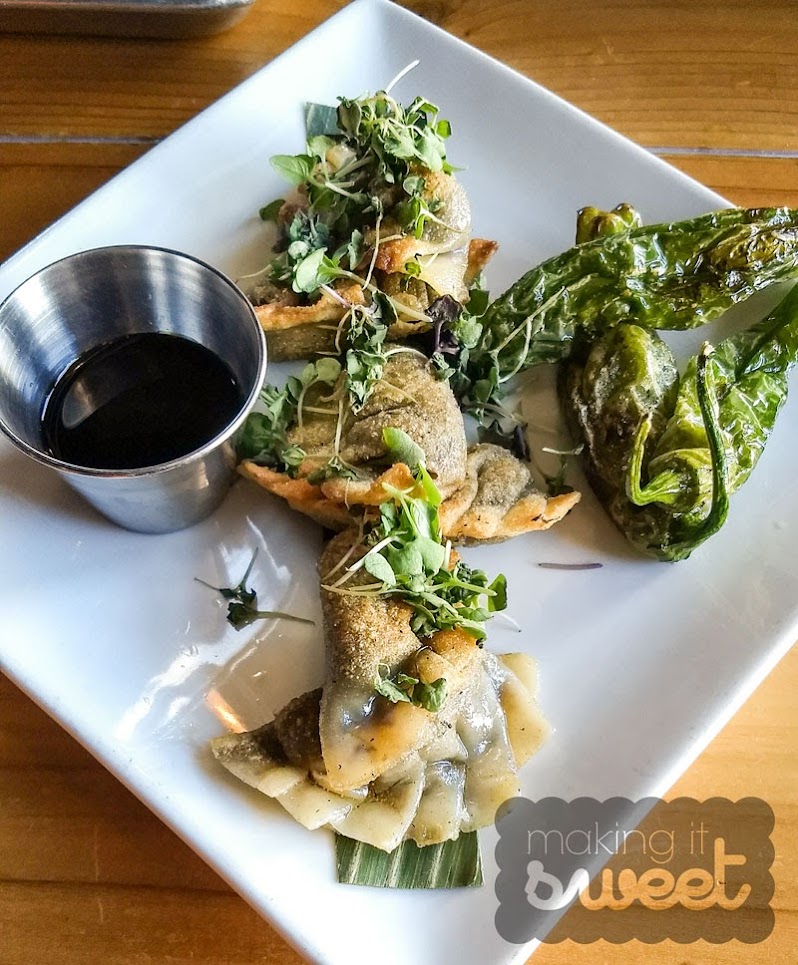 The Portobello Mushroom Gyoza had a good kick and was a nice vegetarian alternative to a pork gyoza. The texture was quite creamy and paired well with the ponzu dipping sauce. 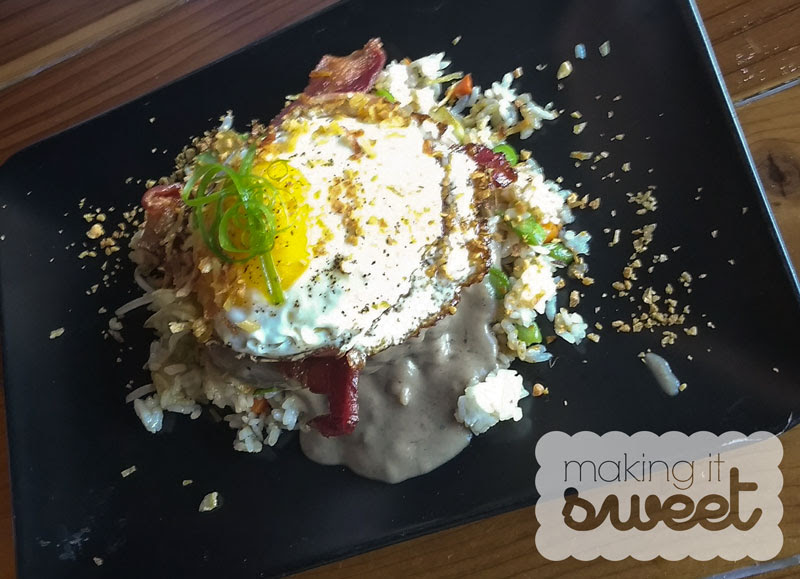 With a Filipino/Hawaiian chef contributing, the menu wouldn’t be complete without Loco Moco—”the Hawaiian heart attack.” Instead of the typical white rice, the dish featured an exceptional  fried rice with fresh vegetables and made-to-order beef patty. The dish was completed with spam, bacon, Hawaiian gravy and of course, a fried egg on top.  Hawaiians know how to eat! 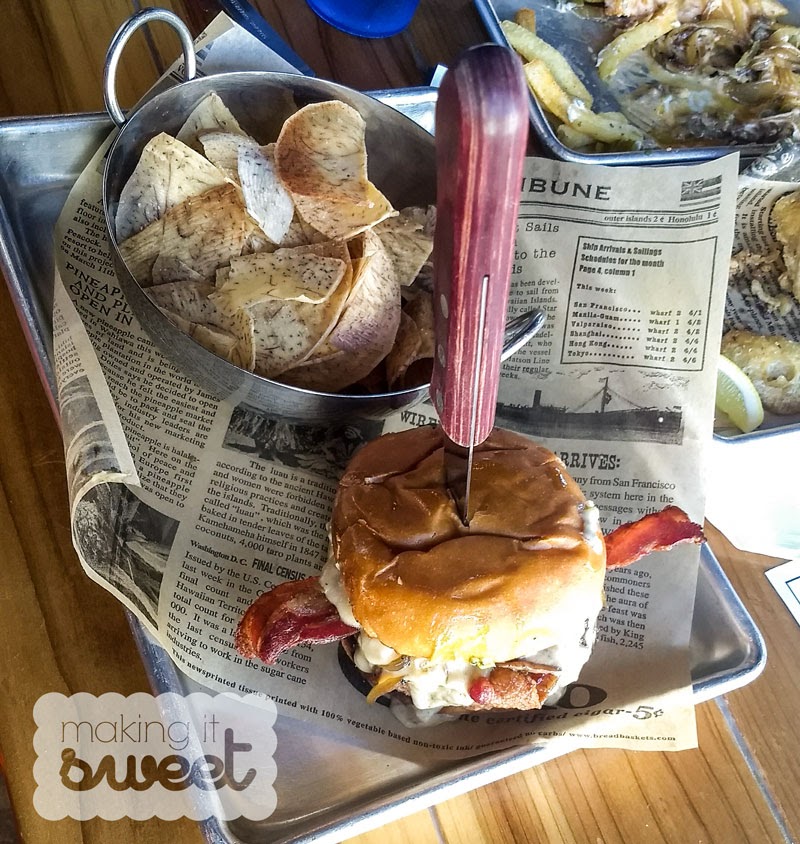 We had a taste of the Messy Burger which made it to Zagat’s “Top 10 Burgers to Try in San Diego.”  An 8oz. Angus beef patty was topped with bacon, smoked bleu cheese sauce, sauteed mushroom and onion served inside a tender brioche bun.  There was no way we could be “dainty” while attacking this behemoth. The burger was juicy and flavors were like ordering a burger “animal style” — but taken to the next level. Our burger was served with taro chips but you can also opt for fries. 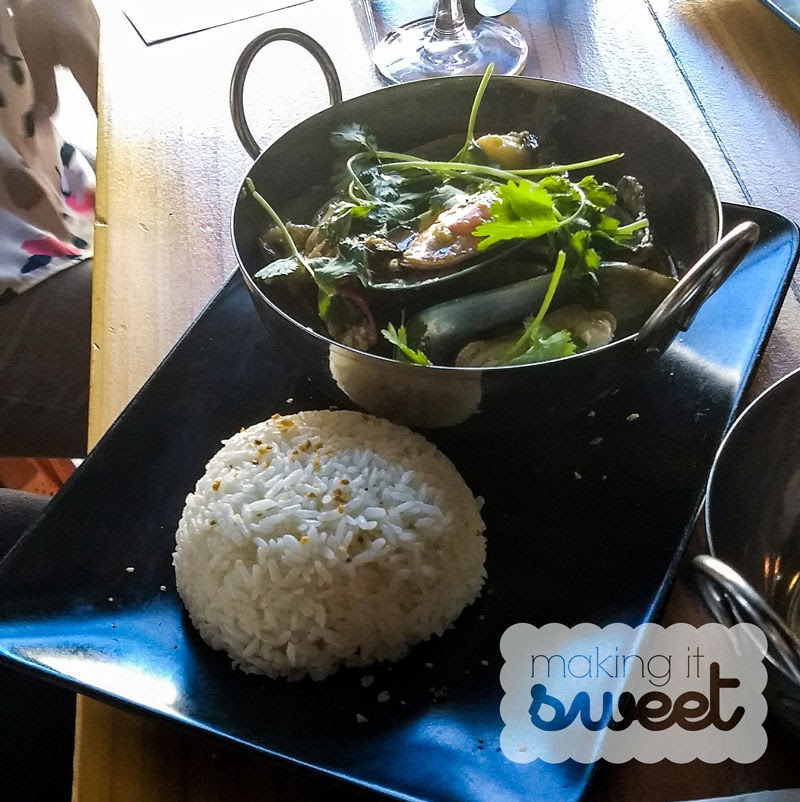 Another contribution of one of the Filipino chefs is a “Bicol Express” inspired dish of steamed mussels cooked in a coconut milk, ginger and garlic. The sauce was excellent — I could have just had it with the rice and be a happy camper. It reminded me so much of my dad’s cooking. 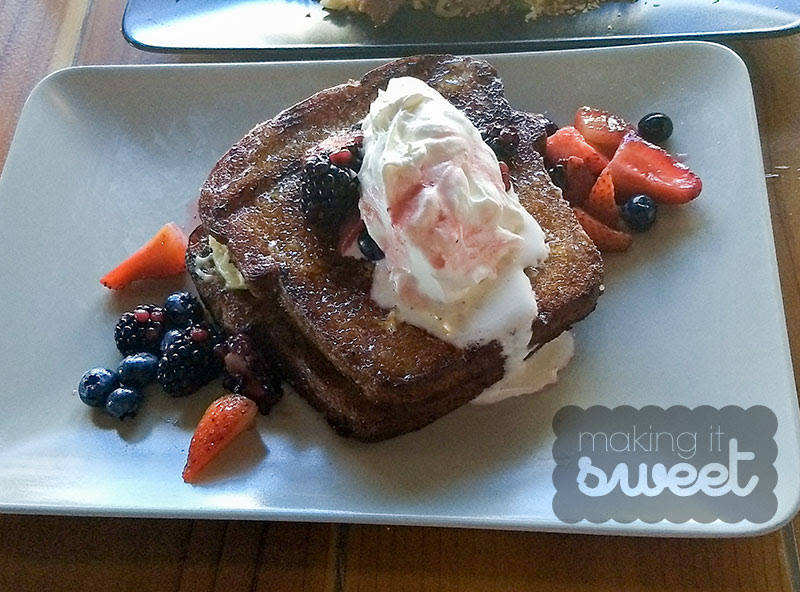 To end our meal, we got a taste of the Sunday Brunch menu with the Mascarpone-Stuffed French Toast. A light ginger mascarpone was sandwiched between caramelized, custardy brioche. The French toast was topped with berries, caramel sauce and whipped cream. The whole dish wasn’t overly sweet — just the way I like it.

With “Tavern” in the name, we got a taste of some craft drinks that definitely had a lot of Asian influence. 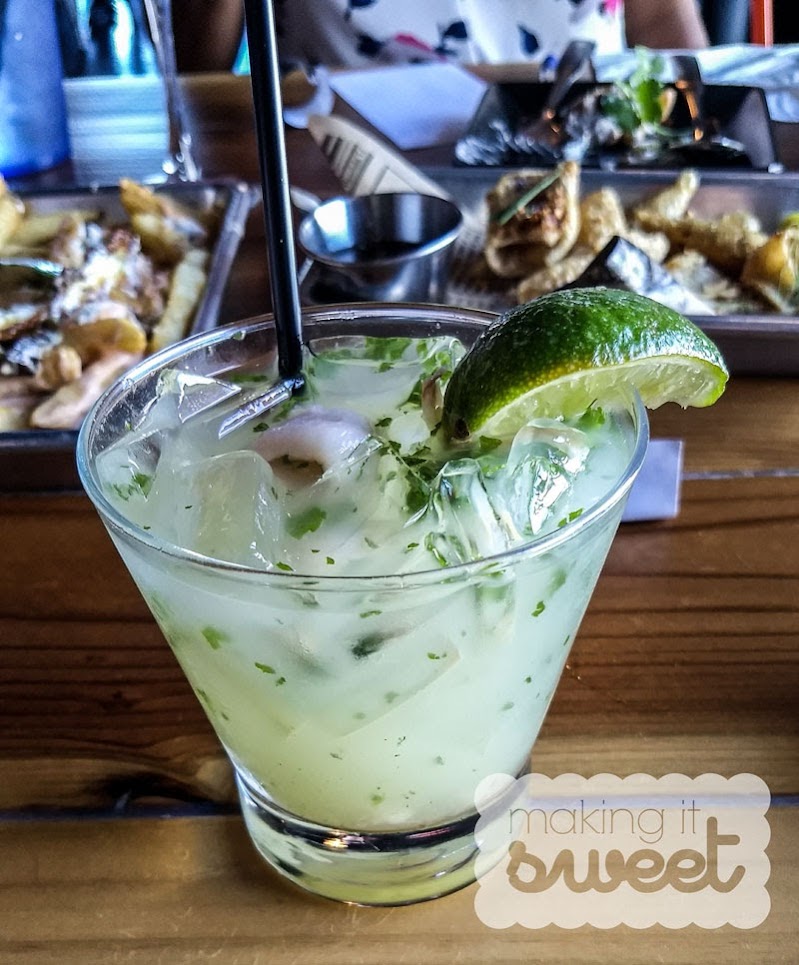 Lychee mint spritzer was very refreshing and great for a hot day. 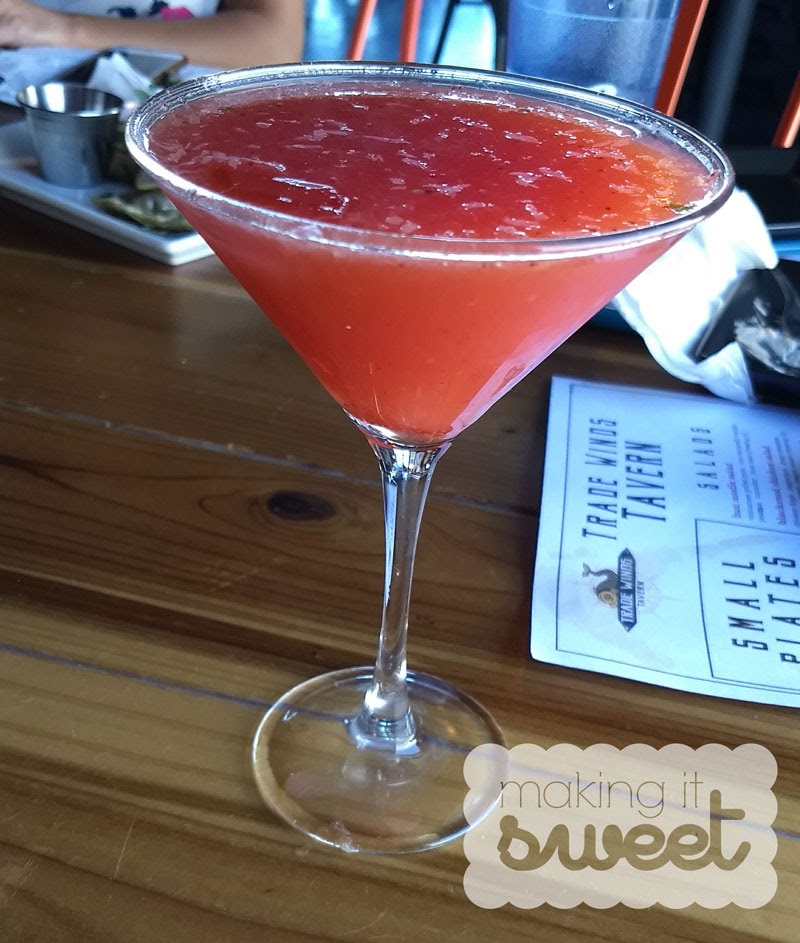 Strawberry Sojutini is one of those drinks that are deceivingly juice-like but will get you in the end. 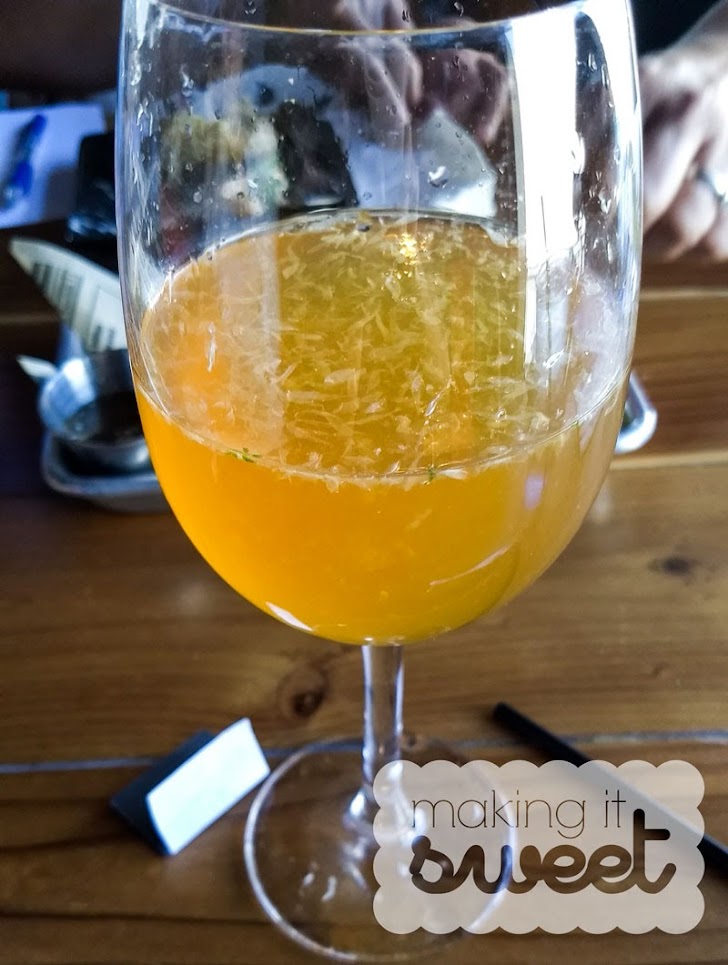 Plum wine was a nice surprise and favorite of many. 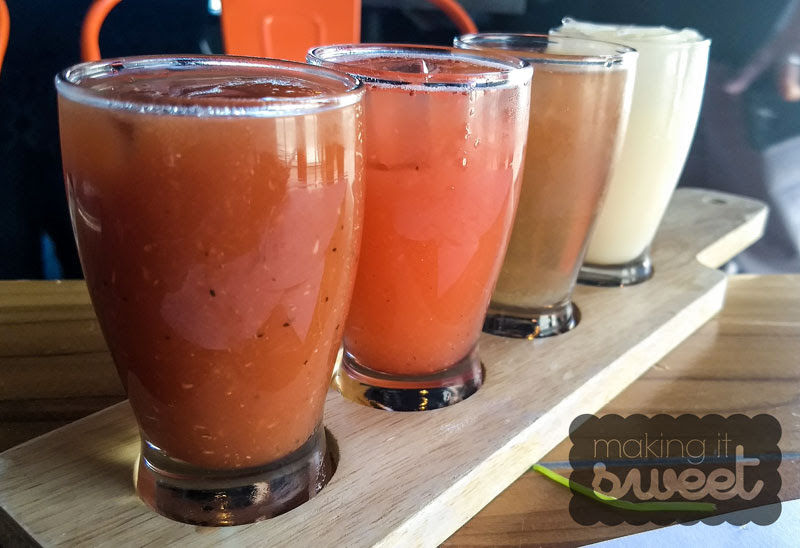 They also offer a cocktail flight with shots of Bloody Mary,  strawberry lemon drop, mega mule and a creamy soju.

You can tell when a restaurant puts their heart and soul into every dish. In this case, the heart and soul is the employees. It is apparent that Sylvia goes through great lengths to make her employees are happy. Their chefs are vested in the restaurant and junior chefs are given opportunities to be mentored by classically trained chefs with years of restaurant experience. This shows in the dishes they produce — from the thoughtful plating all the way to the minute textures and flavors.

Trade Winds Taverns offers meals and drinks to satisfy the bar crowd to people who just want good food. They also have game nights, trivia and karaoke to entertain the night time crowd. It is well worth a visit!

Thank you Trade Winds Tavern and Sylvia Le for your hospitality!

Disclosure: I was given a complimentary tasting in order to review this restaurant. All opinions are my own.