My family has a knack for leaning towards adventure when we plan our vacations. We switch between”roughing it” and slightly more luxurious amenities every other year or so. This year we decided (ok, it was mainly my idea) to take a road trip up the California and Pacific Northwest Coasts, then travel down the eastern side of the Sierras on the way home. I’ve been wanting to take the family to Yosemite National Park and the moment that the summer booking season opened, I was logged in to recreation.gov and ready to hit the “reserve” button to book a site.  But God had other plans for us…

If your read  my previous post on planning road trips, I wasn’t able to book a Yosemite trip but we still wanted a road trip for the summer. I booked the first few days of our trip and the last days and really left it up to our schedule and frankly, God’s will, to guide us to our next destination. It so happened that our trip route ventured through the volcanic legacy of the West Coast.

Yes, I know it’s quite late to post a trip report. Owning a business, raising three kids, school, sports schedules and managing volunteer opportunities after taking two weeks off can hold things off quite a bit! I think the final kick-in-the-butt to get me writing is our family Christmas letter. So family and friends — this is for you!

We left on July 8th, at 9:07am — 1 hour and 7 minutes past our planned departure. After hunting for a toddler shoe and playing “Camping Gear Tetris”, we hit the road in our well-packed 2012 Nissan Quest (with a roof rack storage). Our back-seat passengers: a 12-year old, 8-year old, and 2-year old. Our first stop was San Simeon State Park near Hearst Castle.

The trip north navigated us between deep gorges formed by a fault, golden hillsides of dry brush, and through the charming town of Moorpark where there were a mix of horse stables, ranches and farmland; a retirement community in Camarillo; and the Ventura Keys, which caught our eye so much that we defied Google Maps to drive around it. Once we headed back on the highway, we got stuck behind a tractor and traffic.

It turns out that the traffic was due to a 5000+ acre fire close to Santa Maria. We spotted at least 8 hotspots and air-drop planes overhead. It was quite an exciting sight. We also said a prayer for those in the neighborhoods affected and I checked in on my friends who were staying in that area. (All was good — it rained ashes, but otherwise they were safe.)

We made it to the San Simeon Creek Campground, quickly checked in and pitched the tent (which took all of 7 minutes) then hopped back in our van to attend Mass at Santa Rosa Catholic Church. The church was quaint the people were very friendly. The church was easy to spot with it’s unique roofline and location off the main road.

After Mass we circled back to the “free wood” that we spotted on the side of the road and grabbed what we didn’t need to chop. For those new to camping, you’re strongly encouraged to “buy it where you burn it”  when it comes to wood to prevent the spread of pests and diseases. We then drove through the town of Cambria—which we found too tourist-focused for our taste—and headed to Moonstone Beach on the way to the campground to see if we can find some special rocks.

Heading to the beach was when I realized that I had forgotten Aria’s (the toddler) jacket at home in our haste to leave on time. In the meantime, my extra jacket had to suffice. We planned on stopping at a thrift store to pick up some warm items for her. 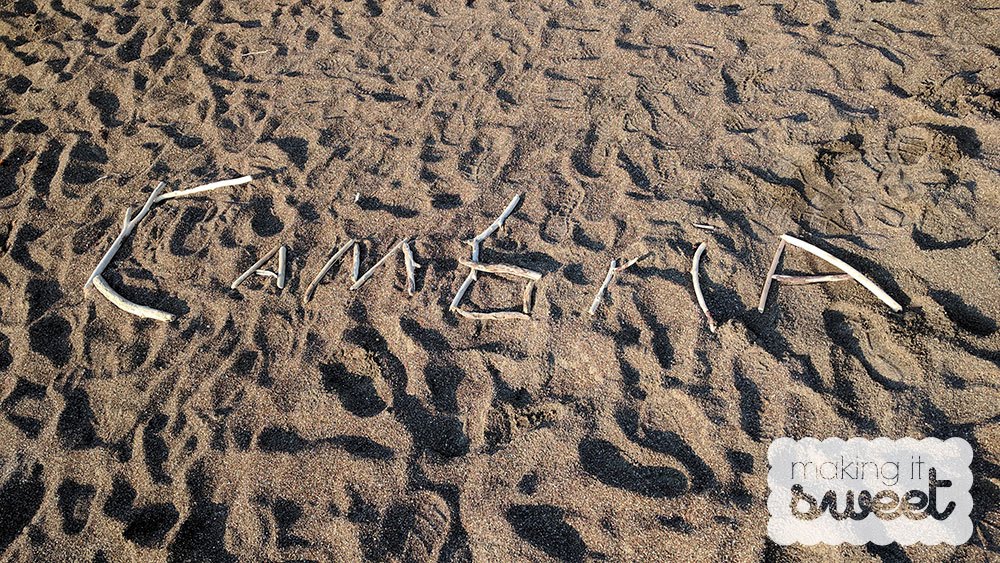 Moonstone Beach was one of the more interesting beaches that we’ve been to. Driftwood dotted the landscape and instead of fine sand, the beach was covered in micro-pebbles . We played in some structures made by aspiring driftwood architects and picked up what we thought were moonstone/chalcedony.

I made dinner of pollo asado with rice and beans and warmed tortillas over a campfire while the family set up the tent with our mattresses and sleeping bags. As I was cooking, Thom met our neighbor from San Jose. They offered us their extra firewood and later gave the kids glow necklaces. Meeting new people is one of the things we love about camping. We capped the night with some s’mores then hurried to bed as the air quickly cooled. We fell asleep to the faint sound of waves crashing and cows mooing from the Hearst Castle property.

Sleep was a bit difficult as the moon was shining so bright. The waves weren’t as relaxing as we thought it would be and to top it off, our air mattress started to deflate. Although we were tired, we managed to have a quick breakfast and break down camp to venture up the US-1, otherwise known as Pacific Coast Highway.

We knew that part of PCH was blocked due to the landslides that occurred during the heavy rains earlier in the year. We wanted to see how far we could go without getting too behind schedule. We cut through the heavy fog and could spot spectacular views of the jagged coastline flanked by verdant green hillsides. We got a bit concerned about the road conditions ahead and found a local who directed us to the best route to get to the main highway, which was pretty much backtracking.

Our curiosity and subsequent backtracking turned out to be a good thing as we spotted zebras at the Hearst Castle property and an elephant seal colony. We stopped at the side of the road to see the elephant seal and their wobbly noses. The area smelled of rotting fish and the seals were enormous, making low grumbles and clicking noises to communicate. It was all so fascinating. 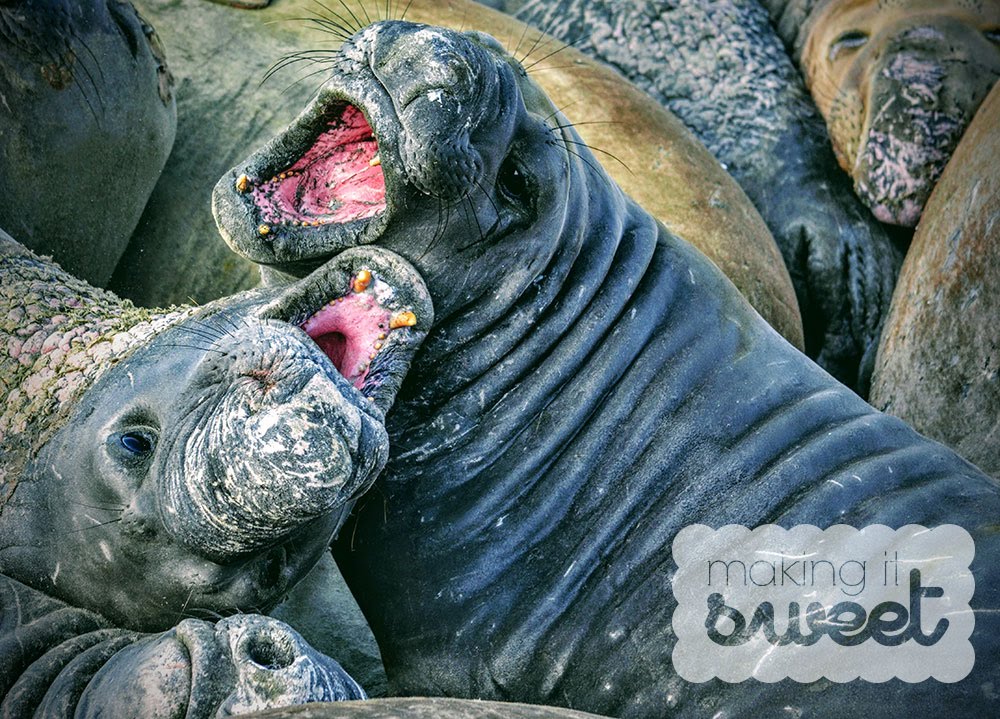 We hopped on 46 East which brought us through more golden hillsides and lush green vineyards beyond the eye could see. Then we headed to San Francisco and stopped at the Google campus on the way.

Our stop at Google wasn’t as nice as our stop a few years ago, where my friend, Erik gave us a personal tour of his workplace. With it being Sunday, the merchandise store was closed and all we could do was visit the Android displays. This prompted us to head to San Francisco—Chinatown in particular—to eat lunch and find some cheap souvenirs. 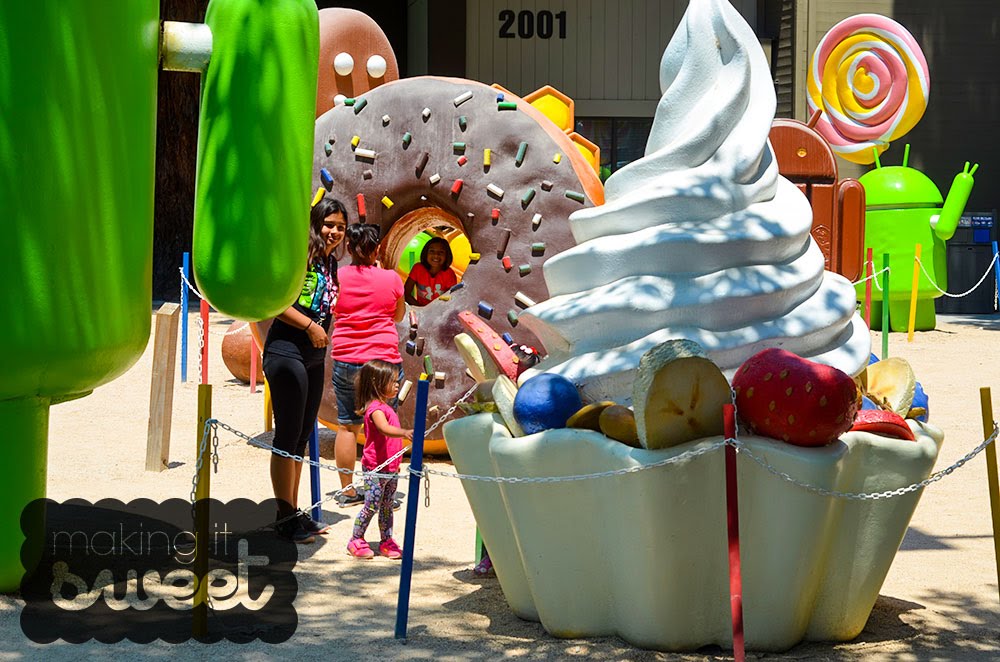 Parking in Chinatown is always a challenge. But we found a spot a little outside of Chinatown and hoofed it to where we wanted to go. We stopped at Wing Sing Dim Sum and had a few gyoza-style dumplings, wrapped in a mochi-like wrapper. We weren’t sure what was in it. We also had some rice balls and pork shumai. The taste was interesting — very Chinese “five-spiced” and the temperature of the food was too cold. It was a “meh” experience but it filled us enough to continue our journey.

We wanted to take the girls to Lombard street (which was a mistake) and got caught up in traffic. So we decided to do the next touristy thing and cross the Golden Gate Bridge — which was covered in thick fog, and not as spectacular as we hoped it would be.

We drove through Sausalito and stopped at a Wal-Mart in Santa Rosa for a break and a new air mattress and a toddler sweater (which they didn’t sell because it was SUMMER). The drive started to get long and boring until we headed on 128 West. It was 64 miles of winding and mountainous road. We drove through farmland and tunnels formed by tree canopies. Past Navarro, the scenery suddenly changed to towering Navarro Redwoods, so dense that it filtered out the light. The road opened up to coastal views of rocky seashores. 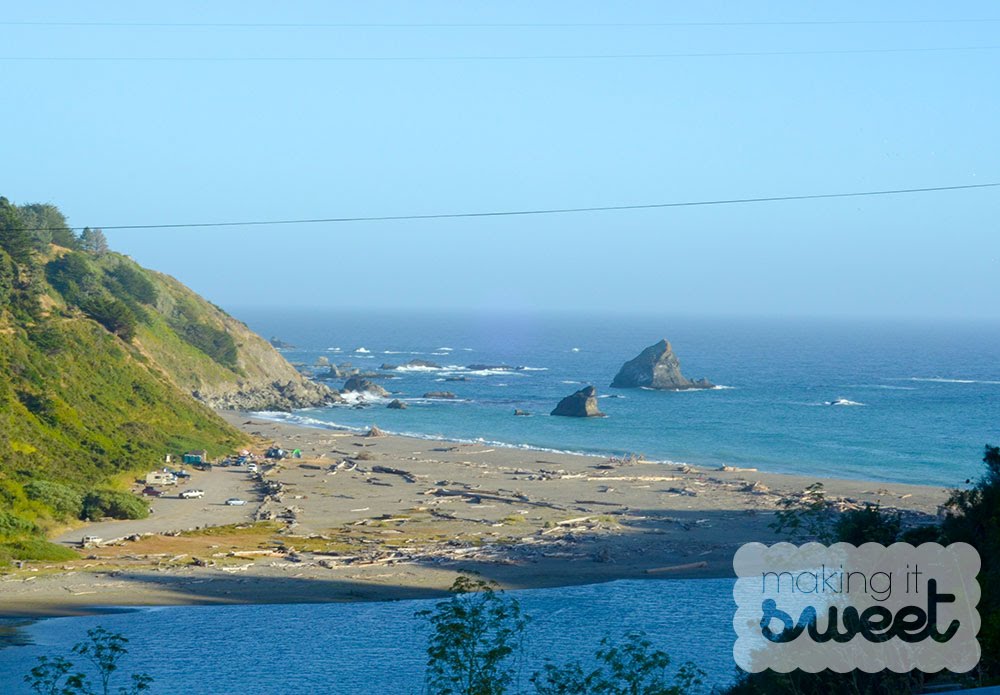 We arrived at Van Damme State Park at about 7:30. We self-registered and made quick work with setting up camp and making dinner.  Our site, #10, was located at the bend of the campground loop. Although there was a private area enclosed by redwood trees, we chose to set the tent just outside of it for easy access to the facilities. The camp store was out of firewood and our neighbors weren’t as friendly as our last neighbors and couldn’t spot us some wood — even when we offered money. We gathered leftover scraps from abandoned camp rings and it became a late night of dinner and dishes in the dark (which the kids reluctantly did).

Showers were $1 for 5 minutes which was affordable and a reasonable amount of time. Hot water came out quickly — which allowed us to use our time efficiently. We fell asleep relatively quickly, close to 11pm. No waves, no moonlight — It would be a better night for us.