It’s been a while since I’ve posted a recipe, right?

Quarantine has done things to me. Most notably, I’ve been taking in a lot of K-Pop content. Some how, some way, my daughter has influenced me to follow some groups that she “stans” and now I’m sucked in. It’s fun and there’s something to look forward to nearly every day. One of the groups that has quickly become my favorites is NCT (all units: 127, Dream, U and WayV). Because of the quarantine, I’ve been annoyed with how people tell their life stories before posting the recipe (I’m definitely guilty of that) so I’ll provide you a quick link before I go into some diatribe about how I came across this recipe.

Jump to the Recipe

You can read about my history with K-Pop here. But what really “sealed the deal” with me was chaperoning a Super M concert for my daughter and her friends. Wow, these boys (ahem, young men), are extremely talented and even better LIVE. I’ve watched quite a few concerts in my life including (N’Sync and NKOTB) but I was just as — if not, even more — entertained with watching a K-Pop concert. I realized I was singing/dancing along to the music that has been on repeat here at the house. I was impressed with all of the members of Super M, who came from different K-Pop groups — one group being NCT 127.

One of the things that the NCT “universe” does is post content on their YouTube channel to keep their fans entertained. It can range from covers of songs, teaching a member how to write to Stephen Curry, dance practices, to bringing awkward members closer together. Recently they had one of their members, Taeil (a.k.a. “Master Moon”) star in a “cooking show” of sorts. I was intrigued by his recipe of “Tael-Guel Tael-Geul” (Chewy Chewy) Pasta. It merged East and West using pasta and Asian ingredients (Korean Peppers, Soy Sauce) to create a “fusion dish” of sorts. The recipe was quite vague and written in Korean (Hangeul). So with the help of closed captioning, Google translate, and my own measurements, I’ve come up with a translated recipe for you to try out.

Aside from the pork belly/bacon, this can seriously be a “struggle meal.” The ingredients are easy to obtain. The recipe calls for pork belly, green Korean chili peppers (gochu), onions, garlic, soy sauce, sugar, spaghetti noodles, and Parmesan cheese. If you don’t have pork belly, bacon can be substituted and your dish will have a more “smoky” flavor. As for the Korean pepper, you can use green bell pepper in its place. I learned that the green chili pepper is not as spicy as it’s ripened (red) version. Luckily, we have a Korean market in town and I was able to obtain these special ingredients, but you can easily find their substitutions at any grocery store.

As I was prepping the food, I started to change the quantities from what’s pictured since I was cooking for five. To prepare your mise en place, slice the onions and garlic, finely mince the Korean chili, chop the slabs of pork belly into 1/2-inch pieces.

To modify or not…

When I first watched the video, I thought that it’d be better to fry the pork belly and use the fat to cook up the onions and garlic. But I quickly realized that the pork belly doesn’t render a lot of fat. So it’s best to use a light-flavored oil to cook up the onions and garlic in order to infuse more flavor into the pork belly. If it were bacon, I’d cook the bacon first, render the fat and pour out the excess, then add the garlic and onions. It’s almost like a carbonara pasta… but with an Asian spin.

How does it taste?

At first bite, it’s interesting. My mind was expecting something tomato-based but my taste buds were brought back to how my dad prepared pancit using thick chow-mein noodles (pasta is believed to originate from Asia, after-all). So it wasn’t much of a shock for me, personally. What created the “umami” effect (without the MSG) was topping the noodles with cheese. It became slightly addicting and I had to hold myself back for seconds (and more). My family enjoyed it — but then again, my family eats practically anything.

If you make the recipe, let me know your thoughts in the comments below! And if you haven’t checked out NCT 127, you’re missing out (especially Moon Taeil’s amazing vocals)!

On to the recipe… 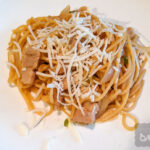 You may adjust the soy sauce mixture to your taste.

Disclosure: This post contains affiliate links where I receive a small commission from purchases.