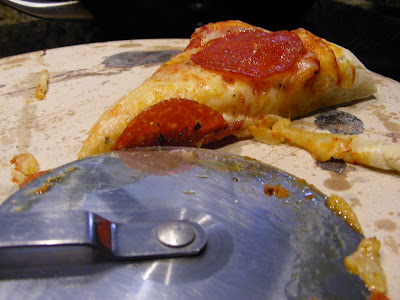 Mya attends school for 3 hours in the morning. I picked her up one day realizing that I had some pizza dough sitting in the fridge that was one day past it’s “use by” date. So we stopped by Fresh & Easy (my new favorite store) and picked up some pepperoni and mozzarella cheese to make a pizza for lunch.

I pulled out the pizza dough and it was about to burst out of it’s bag – they weren’t kidding about the “use by” date! Mya helped to flatten it out on a well-floured pizza stone and helped spread out the sauce. I let her put on the cheese and pepperoni, which surprisingly, she was meticulous about. She evenly spaced the pepperoni and used just the right amount. We topped it off with dried oregano and drizzled it with olive oil and into a preheated 450 degree oven it went.

8 minutes later, it was done. 10 minutes later it was half gone. It was a pleasant and headache-free way to cook and eat with a kid.