Every time a holy season comes around I try to find meaningful activities to connect the family (mainly my children) with their faith. Going to a Catholic school from K-8 immersed me in my faith in a positive way. I understood why we made sacrifices during Lent and why we reflect on the Lord’s passion and suffering. I realized that my children aren’t getting that same experience in public school. As much as my husband and I try to lead by example, they still need something tangible to see how God works in their lives.

I’ve been too busy (and tired) to come up with daily activities for our family for lent. So I looked on Pinterest for some ideas for Lent that would be simple and meaningful for the whole season. I found several versions of a “crown of thorns.” The idea is that during lent, in addition to giving up something for the whole season, we need to make small sacrifices and do good deeds on a daily basis. For every sacrifice made and good deed done, the kids can pull out a “thorn” from the crown. Each time a thorn is removed, we are lessening the burden on Christ.

Wow. So simple, but so powerful.

I had my kids help in making the crown a few days before Ash Wednesday. I had them roll Crayola Air Dry Clay

into thin ropes and I braided/wove the ropes around each other in a circle to form the base. While the clay was still soft, they stuck as many toothpicks as they could in it. Note: Don’t stick the toothpicks in too far or you will have a hard time pulling them out! Not to mention that the clay will crack. 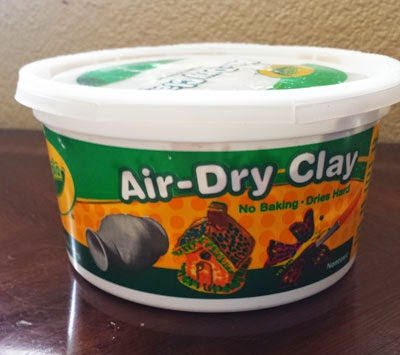 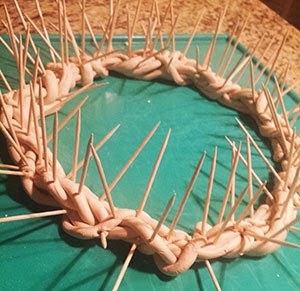 As they were putting in toothpicks my oldest one says to her sister, “If you put too many that’s a lot of stuff we’ll have to do!” My other daughter replied, “But this will help make us good…”

I could see that they understood what was expected of them.

and scraps of paper.

Then I drilled a hole through the top of the cap.

I wanted to have an opaque container so that they can ever-so-secretly pull a thorn and place it in the jar. In doing this, they’re not keeping tabs on each other but rather are making a personal decision to do good and make sacrifices without letting everyone know.

The beginning of the Ash Wednesday Gospel couldn’t have said it better (MT 6:1-6):

Jesus said to his disciples:“Take care not to perform righteous deedsin order that people may see them;otherwise, you will have no recompense from your heavenly Father.When you give alms,do not blow a trumpet before you,as the hypocrites do in the synagogues and in the streetsto win the praise of others.Amen, I say to you,they have received their reward.But when you give alms,do not let your left hand know what your right is doing,so that your almsgiving may be secret.And your Father who sees in secret will repay you.

The goal is to remove all the thorns by Easter so that we can paint the crown gold and decorate it with “jewels.”

What are you and your family doing to prepare for Easter? Share in the comments below!

Disclaimer: This post contains affiliate links where I get a small percentage of sales (like really small). The products I link to have proven to work well for me and I hope they work well for you, too!