Why so late with this post? In all honesty, I feel like I didn’t want this trip to end. I had this written and in the queue but never got around to adding photos and hitting the “Publish” button.  But alas, I had a goal to complete at least ONE whole road trip series within the year I took it! So here we are, at the close of 2015… at least I conquered one goal this year!

We left our “deluxe cabin” in Richfield early to beat the heat since the temperature upon our arrival in Las Vegas was forecasted to be 105°F. I dropped the key off through a hole in a door and left a message for the owners to make sure they could find it.

The southwest drive was definitely warm, but bearable even with a broken AC. At one point, the baby’s cheeks were getting red so our oldest fed her cold water by straw. Our middle child fell asleep in the back, as usual, so we didn’t hear too many complaints from her.

Our family is not the gambling type and we don’t find much pleasure being on the Las Vegas Strip. Plus we took a short vacation on The Strip a few months prior during spring break. We chose to stay outside of Las Vegas in Henderson, NV by the man-made Lake Las Vegas. We’ve stayed in this area two years prior and enjoyed ourselves enough to come back.

We arrived at the Hilton Lake Las Vegas four hours earlier than our check-in time. Hot and sweaty, we exited our van and were greeted by courteous valet drivers and bellhops who immediately offered us cold water and lemonade from the dispensers sitting outside of the building. They sympathized with our lack AC in the vehicle and offered to park the van for us in the garage for free while we waited to check in.

We called the hotel the night before our arrival to tell them about our AC situation and that we would like to check-in early in order to avoid the heat. When we checked in, our room wasn’t ready, which baffled me since the hotel seemed to be fairly empty upon our arrival. However, about half an hour later, they were able to accommodate a drove of airline pilots and flight attendants rather quickly—3.5 hours before the regular check-in time. We were asked to check back in an hour so we waited in the gorgeous hotel lobby and enjoyed the cool building. Long story short, it took an additional two hours to get in our room. While we waited, we walked through the Montelago Village where the casino and majority of shops were vacant and the only life seemed to be at its two restaurants. It surely has seen better days. 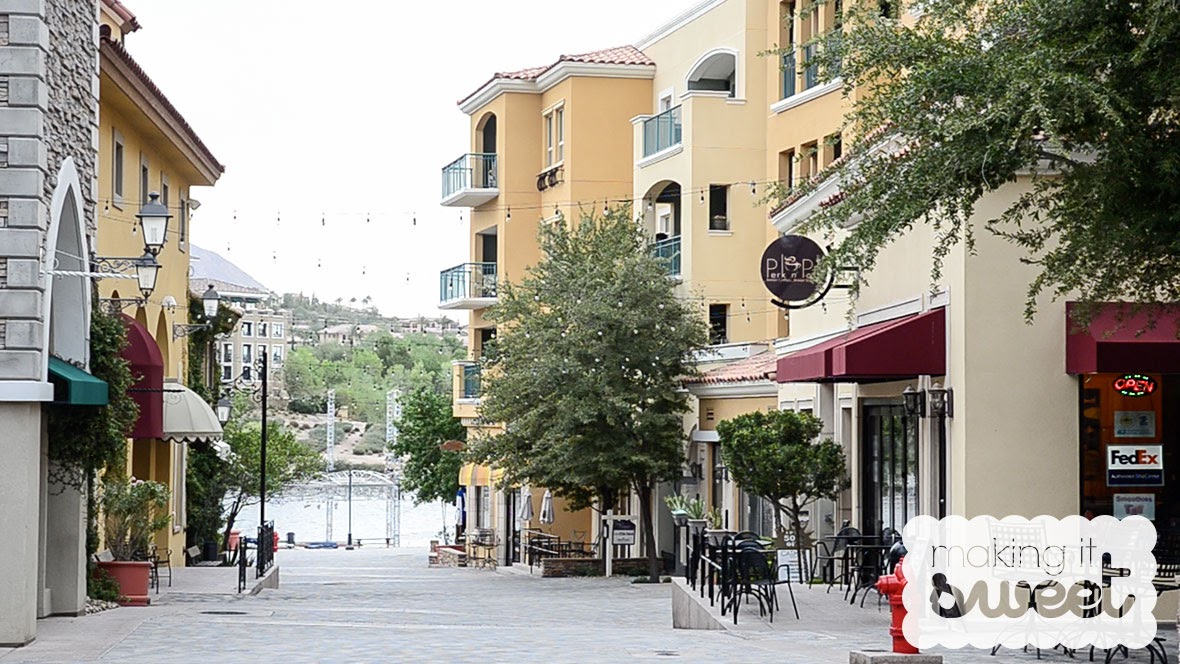 The Hilton Lake Las Vegas has undergone several owners and name changes. The property was beautiful and still undergoing some much-needed renovations. The bones were there — expansive meeting places, quiet areas to get away from the crowd, and a beautiful view. Our room was quite spacious and had a large bathroom — perfect for our family needs. 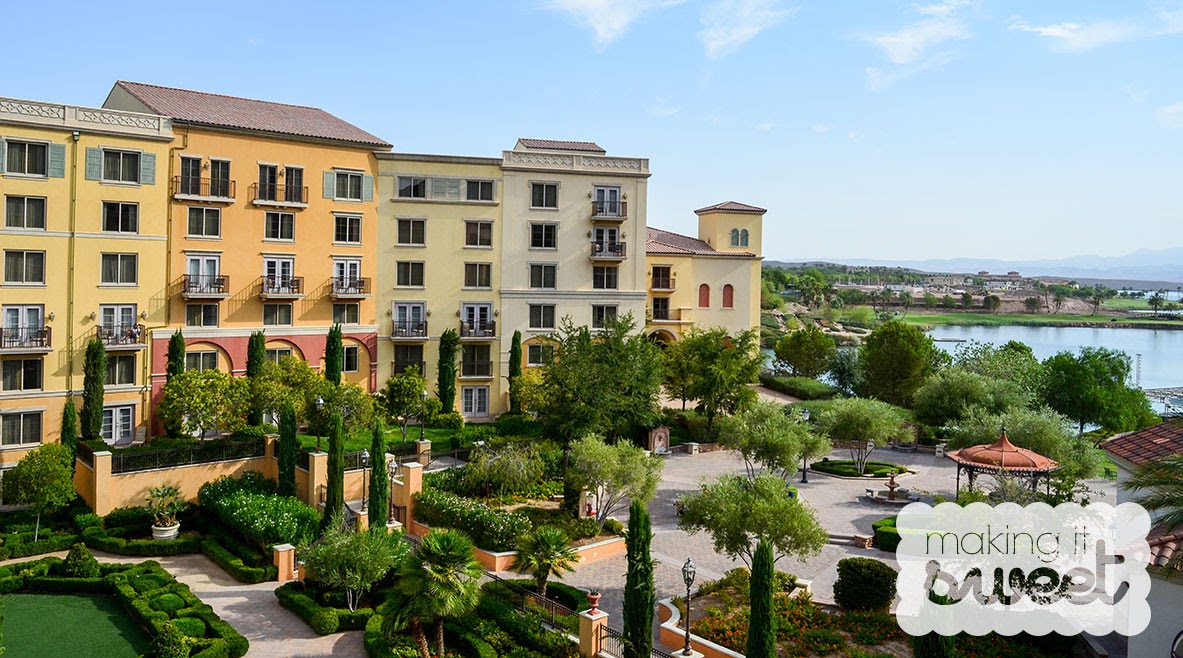 The view from our room

The pool area offered cabanas and lounge chairs shaded by some trees and umbrellas. The pool itself was pretty average—rectangular with no special features. Just a short walk from the pool area was a lagoon that was fed by lake water pumped in from the waterfall feature. The next day, we learned that the pool and lagoon were open to the public and that there was some agreement with the city that the Hotel maintains them.

We drove into Las Vegas once – only to attend Sunday Vigil Mass at the Guardian Angel Cathedral. The cathedral was mid-century modern, with a triangular roofline and alcoves. Even the crucifix was modern, displaying a risen Christ within the cutout of the cross. The cantor had a nice voice, sounding more towards the “reverent-theatrical” side. The deacon gave a spirit-filled homily and even garnered applause. 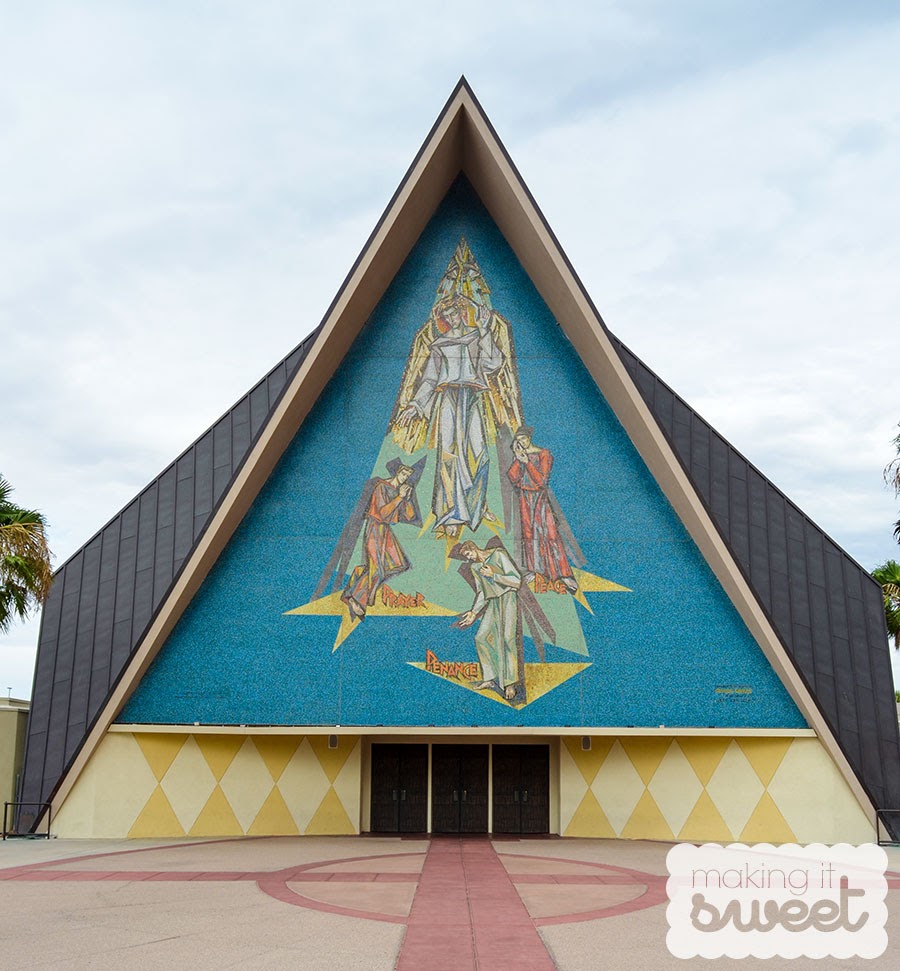 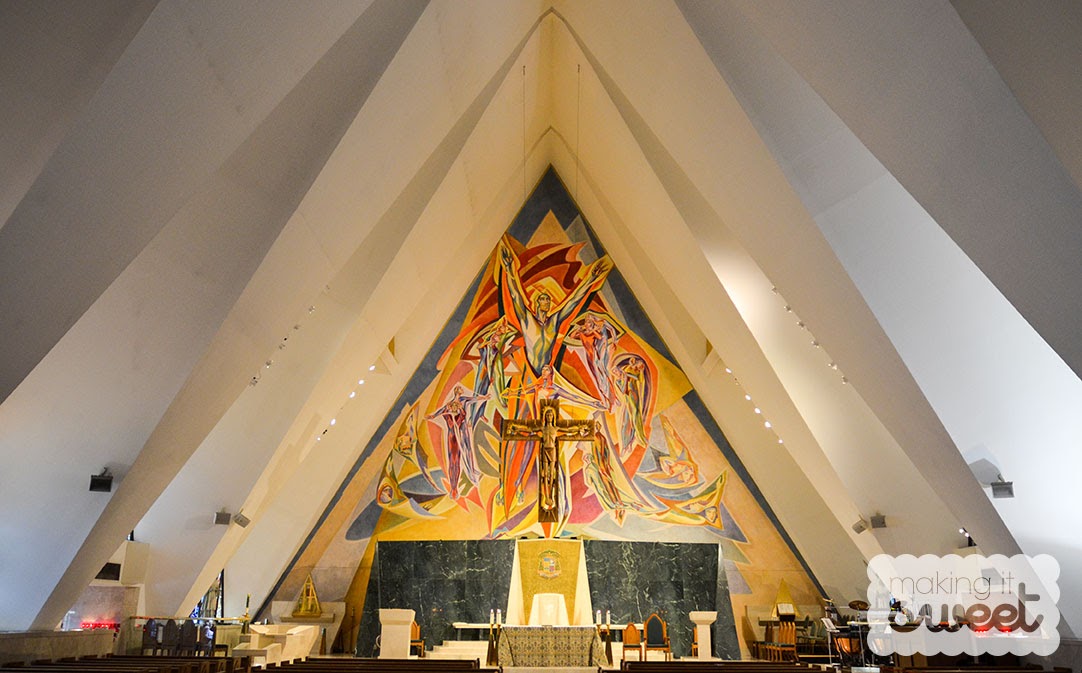 Interior of the Cathedral

After Mass we celebrated my birthday at the Festival Buffet, advertised as “The best buffet in Henderson.” The food was decent for the price and there was a good variety. The only thing I noticed was that the heat lamps were on awfully high that it dried out the food as soon as they were replenished.

Back at the hotel, we enjoyed our last day by walking off our food around the village area. There was supposed to be a concert on the water but it was canceled due to a storm coming in. The restaurants seemed busy and there was a party going on in a rented hall, but it all seemed pretty quiet elsewhere.

My husband contacted the general manager earlier of the Hilton and told him about our check-in experience. The GM profusely apologized and did what he could to correct the situation, including taking our experience and suggestions to heart. We were happy with the open communication and looked forward to seeing what he would do to the hotel as he worked on improvements both in staff and the facility. While we could have left the hotel in a bad mood because the check-in situation and lack of activities around the area, the GM really made an effort to keep us happy and therefore we will be back in the future.

We left early to beat the heat again. We drove through the Cajon Pass where a wildfire jumped the highway and stranded drivers just two days prior to our departure. Some hot spots were still being extinguished by Cal-Fire. God bless those men and women who put their lives in danger to spare ours! 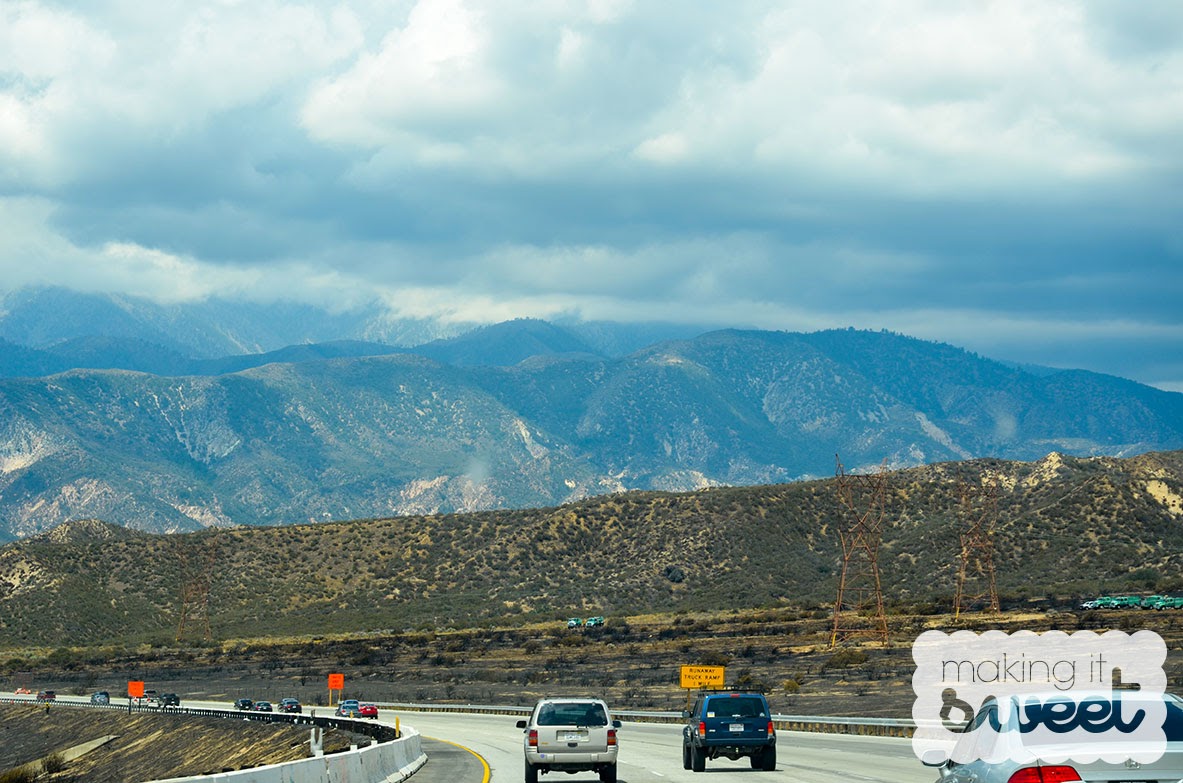 Aftermath of the brush fire in the Cajon Pass.

My actual birthday breakfast consisted of a McDonalds sausage McMuffin in Vegas… then we stopped at McDonald’s in Barstow Station (tourist trap-McD’s) for a quick break and ice cream… then we stopped at McDonald’s in Temecula to get wi-fi and for lunch. THREE McDonalds!  We’ve been going to McD’s mostly for air conditioning, ice and free wi-fi and somehow the kids sucker us into getting something to eat. I don’t recommend it — ever.

Thankfully the drive home was cooler. Seeing how our van looked pretty pathetic with dust and mud splotches from sporadic rain drops during our trip, I asked God for a little birthday blessing of rain to wash our van.

Boy, did He deliver!

Rain started to fall once we hit San Diego proper. We stopped at Costco to gas up and it started to pour. Once we hit the highway the rain was torrential to a point that we had to take side-streets to get home. It was definitely record rainfall! The streets looked like rivers and storm drains were overflowing. 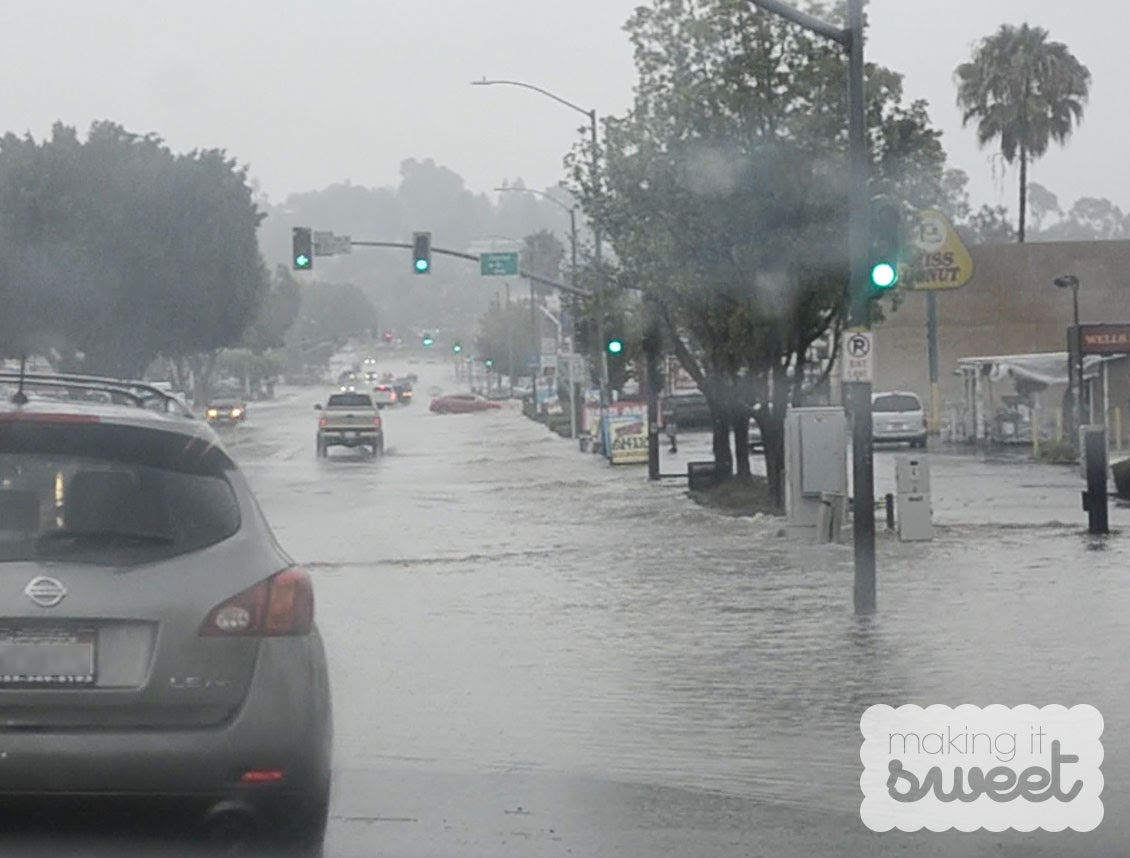 After 3729.4 miles on the road, we were home and back to reality. It was a wonderful trip, building memories for our family and seeing parts of the country that we’ve never explored. It was great to see these places with our children. Another awesome road trip is in the books!

This error message is only visible to WordPress admins